Sarah Firth, of Berkshire, will be one of 8,000 people carrying the London 2012 Olympic Torch this summer 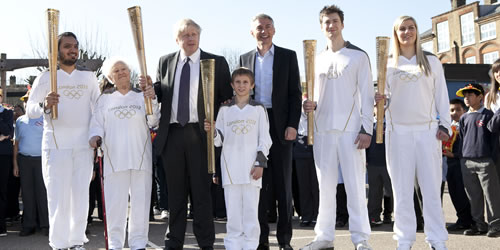 The Olympic torch relay around the UK will last for 70 days Photo: Locog/Getty Images

A former flight attendant from Berkshire admitted she was sky high upon hearing the news that she will take part in this summer’s Olympic Torch Relay.

Sarah Firth will be one of just 8,000 people to carry the London 2012 Torch, courtesy of Lloyds TSB, for her work in helping others come to terms with the sudden death of loved ones.

The 44-year-old’s desire to do something came after her brother, Richard, died at the age of 23 when he fell from a horse during a three-day event in Windsor in May 1993.

Sarah was at the fence where Richard had his fatal accident and had to fight to stay by his side as medics tried to resuscitate him.

After the experience mum-of-three Sarah set up the Sudden Death Support Association to help others who had been through similar tragedies – and it hasn’t gone unnoticed.

“I didn’t want Richard to be alone with a whole load of strangers,” said Sarah – who will carry the Torch through Reading on 11 July.

“After a struggle they let me stay but I really had to fight. Afterwards I had this focus that other people wouldn’t have to fight to stay with their loved ones like I had.

“I was approached to give my story for a NHS paper into the way they dealt with people watching their relatives undergoing resuscitation.

“After it was published I set up my charity because there was not really anyone I knew who was dealing with that sort of thing.

“It consisted of a network of volunteers, all who had lost people suddenly, speaking on the phone to others in the same situation.”

Two years ago Sarah’s charity closed after helping more than 3,000 people in 17 years of service to the community.

Now Sarah focuses on more local causes including running the village fireworks and she admits carrying the Torch will be just as spectacular.

“I am bowled over by it all,” she added. “I have no idea what to expect. I am slightly concerned about dropping the Torch as I don’t know how heavy it is.

“I didn’t get any tickets for the Olympics but we did apply for lots, so for my children this will mean they will feel totally part of the Olympics.

“For them and my parents this will be a very important day and one they will remember for the rest of their lives.”

As the only National Presenting Partner of the London 2012 Olympic Torch Relay, Lloyds TSB is bringing the excitement of the Games and Olympic Flame closer to you. Find out what we’re doing in your community and who is carrying the Flame at lloydstsb.com/carrytheflame