All Out Cricket Magazine's Phil Walker catches with one of English cricket’s most skilful seamers, Graham Onions 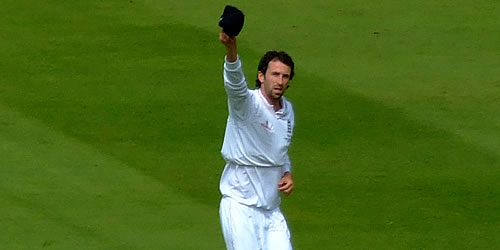 After an irresistible start to the season with Durham following a winter on the edges of a Test recall, Graham Onions, fresh from a maiden 10-wicket haul against Middlesex at Lord’s, is on the cusp of a full return for the summer series against West Indies.

All Out Cricket magazine’s Phil Walker swam down to a sodden Oval cricket ground to catch up with one of English cricket’s most skilful seamers, and coolest cats.

So, it’s not a bad way to announce yourself on the season by trimming up the England captain twice in the same match…

You know, to get Andrew Strauss is a bonus. He is someone people always keep saying you want to get out in order to get yourself back in the side, and I suppose there is a little bit of me thinking that is the case. But I’ve also got to do a job for Durham, and that is to get their best players out. Andrew is the England captain, he is a very good player and for me – obviously by the reactions that you probably saw – getting the wicket for Durham was pretty special.

I saw that opening spell, and to me you looked like an England bowler again. You’ve traditionally done quite well at Lord’s, where of course the first Test takes place next month…

Yeah, I’ve actually had quite a few good moments at Lord’s in my career. I think whenever you go to Lord’s any cricketer should absolutely love playing there and they should relish it. I remember the first time I was there I took a five-fer with Durham. I also got my name on the honours board on my debut against West Indies, and obviously I’ve just got my first 10-fer. These are moments in your career you’ll never forget.

I was impressed with the pace as well – do you feel you’re back to the same level of intensity and pace as you were a few years ago when you were tearing it up for England?

I think the injury that I had [Onions suffered a stress fracture of the back and didn’t bowl a ball in 2010] and the reason I had to have surgery was basically because I’d done a lot of bowling, and my body, and my back especially, took the toll. But that’s gone, I don’t really think about it. I feel good about my body now. I’ve done a lot of work in the gym to get my body fit and strong.

Have you had any twinges?

To be honest, no not really, I try to look after myself, I try to do my stretching, my workouts to keep my back strong. Pilates is a massive thing, I was massively grateful when I was coming back from injury, Pilates made a huge difference. They [Durham CCC] spent a lot of money on me, to try and get me back on the park and I thank them massively for that. It was certainly the toughest part of my career, but it makes it even better now knowing that I’m fitter, stronger and taking wickets.

When you were playing in 2009, you were sharp and at Test pace, say 85-87mph, even pushing 90 when it was coming out really well. Are you at that same kind of level now?

Yeah, it’s such a strange one, as a fast bowler you talk about this magical word ‘rhythm’ and last week [at Lord’s] I was probably bowling as quick as I’ve bowled but I felt as if I could bowl all day, which I did really, I bowled a hell of a lot of overs in the game. But I felt as though I was bowling within myself and people were saying ‘good pace’, but I actually felt I was running in quite easy. I try not to look at the speed guns, 90mph is just a figure, but if you’re bowling 90mph and bowling it outside off stump and you’re getting smacked everywhere then it makes no difference. I was only bowling at whatever pace I was bowling at, but I was bowling at the batter, I was bowling aggressively: hence the reason I got the wickets.

I’m not going to lie to you, the wickets that we’ve played on so far at Durham and then at Lord’s have certainly been helpful towards the seamer, but you’ve still got to put it in the right areas. When the ball isn’t doing as much, that’s when you need your skills as a bowler. You need to be thinking about swinging the ball more, or your bouncer comes into play a bit more. That’s when your experience helps, knowing when is the right time to do that. I think I’ve got that now. I’ll back to last year and when I came back from injury I took wickets at Sussex and that was one of the flattest wickets I’ve played on. You’ve just got to realise when you need to put a bit more effort in, or when to throttle back and pitch it on off stump, and that’s how you get your wickets.

Were you surprised that you got called up to the Test squad over the winter?

I felt as though I had done enough [Onions took 50 Championship wickets in 2011] to be picked on the tour. But there was Tim Bresnan, Chris Tremlett, James Anderson, Steven Finn and Stuart Broad! I was there as back-up, and as it happened Bresnan went home early and I got to stay. But obviously on the other side of things I didn’t get picked to go to Sri Lanka, which was very hard to take. But you go through ups and downs and I didn’t get dropped as such, they just played an extra spinner.

Do you expect to hear your name when the first Test squad is announced?

If I’m being totally honest, probably not. I think I’m certainly up there with the best bowlers in England but it’s just a case of who they pick at the right time. The reason why I say I don’t expect to be picked is because of what I went through in 2009. I don’t expect anything, that’s the way I look at things, I’ll enjoy myself, I’ll do everything I can to do it but if it doesn’t come along it’s not the end of the world.

If you do get that call-up and pull on that shirt again, it’ll be two and a half years since you last did it. Was there ever a time you thought it wasn’t going to happen?

All the time, all the way through my surgery.

It’ll be an emotional moment, right?

It’ll be massive, absolutely huge. I will also be very proud. I never realised how hard it would be to overcome such a serious injury. It’s special knowing that you’ve actually had to work hard to get to where you want to be, and I feel I’m pretty close to it again.