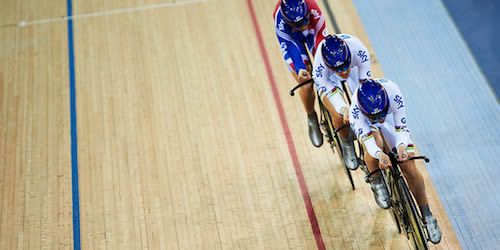 For the second time in 24 hours, defending champions Great Britain humbled their sporting arch-rivals on their home patch in Melbourne.

The world record Great Britain set at the recent World Cup in London was rewritten twice in qualifying and smashed again in the final.

Australia made a storming start and were 1.3 seconds up on their rivals after 1km but Great Britain’s trio didn’t panic, slowing eating into that advantage and then, as the frontrunners dramatically faded, hammering down the power in a tactically flawless display.

It means in just a few weeks, Great Britain’s youthful trio have shaved more than three seconds off the previous world best – an ominous expression of intent ahead of the London 2012 Olympics.

“What the men did last night was such an inspiration and we were determined to follow in their footsteps,” said Trott.

“We didn’t expect such an improvement but we knew we could break the world record again, we just didn’t know by how much and we’re so happy with that result.

“We’re in a great position now, we like to lead from the front and we know we are going to get chased but that doesn’t bother us.

“We are only going to get faster between now and the Olympics.”

Meanwhile, Olympic champion Victoria Pendleton and world champion Anna Meares will continue their bitter rivalry in Friday’s semi-finals of the women’s sprint while Lithuania’s Simona Krupeckaite and Ukraine’s Lyubov Shulika will race on the other side of the draw. Meares has looked in imperious form, setting a new world record in qualifying, covering the 200m distance in an average speed of 66.777 km/h.

Saracens ready to bounce back from Wembley woe – De Kock