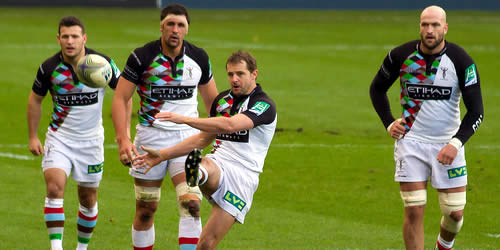 Harlequins are six points clear at the top of the Aviva Premiership table Photo: Pierre-Selim, via Flickr

Full-back Mike Brown insists Harlequins are capable of fighting for trophies on both domestic and foreign fronts and hasn’t ruled out the Aviva Premiership leaders completing a historic double.

Quins went for the jugular against Premiership champions Saracens at Wembley last Saturday and won 24-19, yet this Friday they become the hunted in defence of their Amlin Challenge Cup crown with a quarter-final in Toulon.

But the 26-year-old is adamant they can add Toulon to their impressive set of scalps at the hostile Stade Felix Mayol, before bagging themselves an Aviva Premiership play-off place when they face Wasps the following week.

“We look to win every game in whichever competition we’re in, from the A league up to the Premiership and we’re taking Toulon as any other game,” said Brown, who will be hoping to end the season on a high at this year’s Aviva Premiership Final on 26 May.

“We won down in Toulouse before Christmas and it will be good to experience another French club.

“I’ve never been to Toulon but I’ve seen it on TV and the atmosphere is unbelievable.

“Then we’ve got Wasps the week after and they’re fighting for their lives so it’s going to be a massively tough game.

“Quins also had tough times and I’m sure they will come out the other side.

“A few seasons ago that was us so I know what it’s like and I’m sure they’ll come out on the other side but hopefully not against us.”

Harlequins’ Wembley win against Sarries made it one-all for the season after the champions won 19-11 at Twickenham in late December.

But dreams of taking the London bragging rights against Saracens in the Aviva Premiership final on May 26 at Twickenham don’t occupy Brown’s mind.

“I just want to get to that final and win it to be honest,” he said. I don’t care who it’s against, I’m not bothered. I just want to win because that’s the most important thing.

“I’ve been to a Premiership semi-final and got destroyed by London Irish in 2009 so I want to get to that final.

“I think one of the key factors in our improvement since last year is that we haven’t changed too many people.

“We’re another year on together and we’ve got a lot of young English guys who have been playing together for many years.

“Conor O’Shea and Mark Mapletoft have done a brilliant job along with the coaching team we had already.”

If you buy a ticket for this year’s Aviva Premiership Final on 26 May you will receive a free rugby shirt. Go to www.premiershiprugby.com/freeshirt to buy yours