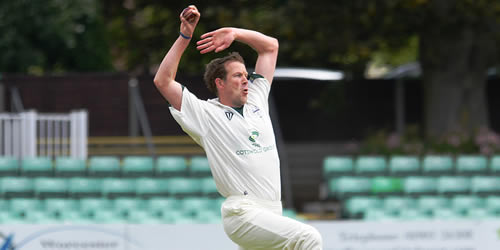 At 36 years of age, journeyman seamer Alan Richardson is still one of county cricket’s most prolific wicket-takers. Chris Airey spoke to the man who topped the Division One wicket-taking charts in 2011.

Last season was a bit of a dream, right?

It was my best year stats-wise. I am more than happy to take 50 wickets but to get 70-odd [73 in all] was fantastic and just the way I bowled, it felt good for virtually every game. It was probably the best I have ever bowled; everything just clicked together. Pity it happened when I’m 36 and not 26, but there you go!

I just want to play cricket and stay on the park for as long as possible, so I set little targets each year. For me it’s not in terms of cricket but it’s how many overs I can get through, so if I reach a certain target it means that I am fit enough and bowling well enough to stay in the side. I want to make a big contribution like I did last season and I guess it will be to build on what I did last year and hopefully kick on at the start of the season.

Which Worcester players should go well in 2012?

We are a very young side. If you take me and Vikram Solanki out of the side you’ve got a bunch of kids, really. I think Moeen Ali will just continue to improve, he spent some of the winter away playing first-class cricket in Sri Lanka and I think he’ll certainly be someone who will be a real good player in the future. Alexei Kervezee is one to watch; he probably didn’t have his greatest season last year and he would be the first to admit that, but he played our best innings of the season at Trent Bridge on a pretty awful wicket and I think that will give him confidence going into next season.

Richard Jones has had a bit of struggle of late, but when I first joined the club two years ago he was our best bowler by miles. He’s got all the attributes to be a really good bowler and when he finds a bit more consistency I think he can be whatever he wants. I expect a few good years from all those young guys. There is a good future here.

What kind of impact can Phillip Hughes have on the club?

It was my final year at Middlesex when a young lad called Phillip Hughes turned up. He was a bit of unknown then really, he had only played a handful of first-class games and he absolutely smashed it everywhere and no one knew how to bowl to him. Now people have worked him out and he has to work harder for his runs. He’s going through a difficult period at the moment but if we get him playing at his best it will be a fantastic signing for us. He has got a unique technique, I have never seen anyone bat like him, but he will be a fantastic guy to have in the dressing room: a typical Australian, not quite in the face as most of them, but he has a really good attitude towards the game and I think he’ll do really well here next year.