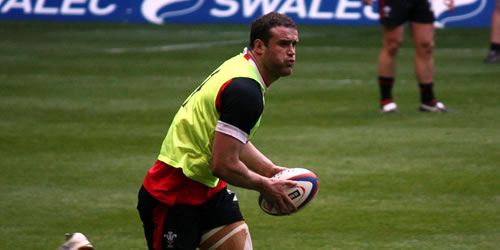 Wales centre Jamie Roberts is out with a knee injury Photo: Sum_of_Marc, via flickr

Wales centre Jamie Roberts faces six months out of the game after suffering a serious knee injury while playing for the Cardiff Blues.

Roberts aggravated an anterior cruciate ligament injury he originally picked up in November against Glasgow Warriors on Friday night and will not travel to Australia for Wales’ three-Test tour in June.

Roberts starred in this year’s Six Nations, starting all five games and scoring the breakthrough try against Italy in the in the Grand Slam Champions’ penultimate match.

But the 25-year-old was philosophical about his luck with injuries this season, which have seen him start just five club matches for the Cardiff Blues.

“The decision has been made for me to have an operation on the Anterior Cruciate Ligament later this week,” he said.

“It will mean a minimum of roughly six months away from the playing field.

“I originally injured my knee in Paris playing against Racing Metro after returning from the World Cup.

“With the fantastic help from the medical staff at the Blues and Welsh Rugby Union, I was able to rehab my knee well enough to get me through a handful of games for the Blues and the successful Grand Slam Six Nations campaign with Wales.

“However, following my injury in the match against Glasgow on Friday night I’ve been advised by the knee surgeon that my knee is now not stable enough to continue playing and potentially risk further injury to the knee.

“I suppose it’s a chance for me to get my body fully right for what is a huge season for both club and country, with a certain carrot at the end of it too.”

London 2012: Ennis gold is out of her hands, says Backley