Tancock has no concerns over Olympic Aquatics Centre roof 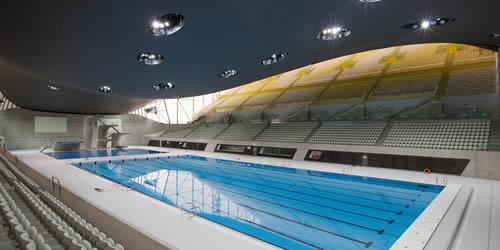 Liam Tancock has brushed off perceptions that the ceiling of the Olympic Aquatics Centre isn’t ideal for backstroke swimming – insisting if it wasn’t brought to his attention he wouldn’t even know about it.

The 26-year-old took to the London 2012 pool competitively for the first time in March for the British Gas Championships – comfortably booking his Olympic place by taking gold in the 100m backstroke.

Tancock wasn’t beaten once on route to doing so, showing no signs of not being able to navigate through the water while looking up at a roof fellow Brit and former world champion Gemma Spofforth described as “awful”.

She still won the women’s 100m backstroke to join Tancock, who retained his world title in the non-Olympic 50m backstroke event last year, on the British team but did highlight a problem with the lights.

Spofforth stated that the fact that the lights, which swimmers follow, are arranged in a v-shape as opposed to one after the other in a straight line is disorientating – but it is all news to Tancock.

“I have been asked ‘what do I make of the roof’ a lot but I haven’t noticed anything at all,” said Tancock – who earlier this month was back at the Olympic Aquatics Centre for British Swimming’s annual national squad camp.

“It is only through people asking me and ‘saying what is the roof all about?’, that is has come to my attention. It has been perfect for me and I haven’t noticed anything, which is obviously a good thing.

“I am focussed on my swimming, not what is around me or the competitors or the roof or the venue. It hasn’t been an issue and hopefully it won’t start to be now all these things have been brought up.

“We were all excited about the Olympic trials being held in Aquatics Centre and I got out there and raced fast and qualified for the team like a lot of other people did.

“It was nice that people qualified on different days and by the end of the week we were one as a team and it was great to come back and experience the pool again.”

Tancock, who finished sixth in the 100m backstroke at the Beijing Games in 2008, joined the 37 other London 2012 qualified swimmers in getting another look at the lights of the Olympic pool earlier this month.

And, with a second Olympic appearance, and at 27 come the Games perhaps last, less than four months away – Tancock insists he knows every move he will make from now until then.

“After the trials we had a quick orientation meeting and it gave us some idea of what is planned over the next few months leading up to the Games,” he added.

“And I am pretty excited about my training plan leading up into the Games. We’ve had the week as a British team in London and I’m back up in Loughborough.

“We have got a couple of training camps, one in Florida and a few competitions in Europe and then it is pretty much onto the holding camp in Edinburgh with the British team again and into the Olympics.”

British Gas supports British Swimming at all levels and is getting the nation to show its support for Britain’s swimmers. For more information visit www.facebook.com/BGSwimming