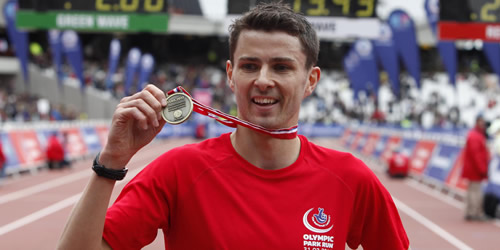 The time would have won gold and broken the Olympic record at the 1908 Olympics in London – the last time five miles was part of the Games schedule.

However, Davies, 26, believes this could be the springboard he has been searching for to finally catapult him into the elite level after a promising junior career.

“My ultimate goal is to one day represent the country,” he said. “I do cross-country, road, track – everything I can and I train every day too.

“I have actually run a bit faster than that before, and as long as I keep on improving every year maybe, one day, I will still get to represent Great Britain.

“It is a fantastic feeling and I can’t believe all the attention I received afterwards. It felt like just like a normal race when I finished, but, wow, not afterward. But it is nice to be in the limelight.”

The five-mile run was the first ever public event to take place in the stadium which traversed the Olympic Park in east London.

Applications to take part in the race totalled 42,678 and the 5,000 runners were randomly chosen to take part from across the United Kingdom.

Cardiff Athletics Club runner Davies, who works as a performance administrator for British Triathlon, insists he did not envisage winning, despite the convincing margin of victory.

“I wasn’t expecting to win before the race but with a mile to go I had a look behind and I could see I was far ahead of everyone. There was a different race going on behind me, so I knew then I could just enjoy myself,” he added.

“To win a race is fantastic, but to win a race here at this stadium is something which will not happen again. This is a once-in-a-lifetime thing.

“My dad hasn’t seen me race for a couple of years but he is here and I think he will be very happy.”