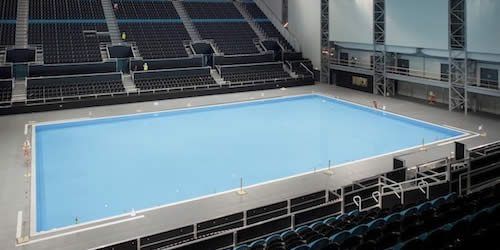 The water polo arena will be taken down after the Games Photo: ODA / Getty

London 2012’s final Olympic venue has been completed – just one month before it hosts its test event.

The 5,000-capacity silver coloured Water Polo Arena is a temporary facility – with an inflatable roof – that has taken just 13 months to build.

The wedge-shaped structure will be taken down after the Games, with elements reused elsewhere in the UK, including incorporating materials available through the rental market to promote reuse and reduce construction waste.

The venue is based at the eastern entrance to the Olympic Park next to the Aquatics Centre, in one of the most compact areas of the 500-acre site. To make the best use of available space, the two buildings share a number of back of house facilities.

“The water polo arena will be a great stage for epic Olympic medal battles in this fast and tough sport this summer,” said London 2012 chairman Seb Coe.

“We will now be working hard to quickly prepare the arena for fans to cheer on some of the worlds-best players at the Visa water polo invitational in May, a vital test event for Locog ahead of the Games themselves.”