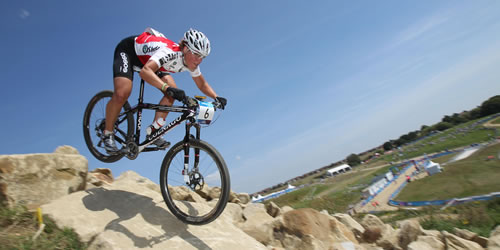 Several major alterations have been made to the course at Hadleigh Farm Photo: Locog/Getty Images

London 2012 officials have listened to criticism and made a series of improvements and alterations to the Olympic mountain bike course.

Competitors at last year’s test event at Hadleigh Farm, including winner and two-time Olympic champion Julien Absalon, said more room needed to be created for passing places while others said the 5km man-made circuit was ‘too flat’.

Parts of the course have now been widened and the main climb has been extended, changes which organisers Locog and cycling’s world governing body believe should now assuage all concerns.

“These changes to the course have been implemented after feedback from the elite athletes following the test event and from conversations with the UCI,” said London 2012’s sports director Debbie Jevons.

“We are confident that the London 2012 course remains one of the most technically challenging courses at an Olympic Games, whilst we have ensured that it is as competitive as it can be by increasing the number of places where competitors can pass each other.

“It is wider and higher than for the test event and with the stunning setting of Hadleigh Farm we are looking forward to a world-class Olympic event.”