Organisers mark 100 days to go by unveiling a giant set of Olympic rings, made up from over 20,000 plants at Kew Gardens 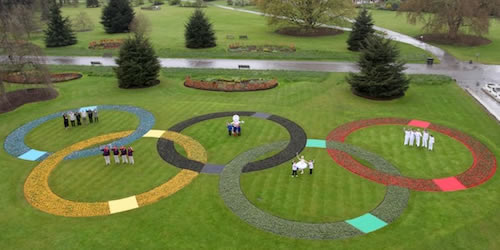 The Olympic rings at Kew Gardens will be in full bloom come the Games Photo: Locog/Getty Images

London 2012 like to boast they are Green Games – perhaps they should make that the green-fingered Games.

Perhaps to reflect the British obsession with gardening, organisers marked 100 days to go by unveiling a giant set of Olympic rings, made up from over 20,000 plants, at London’s famous Kew Gardens.

The flowers were planted over a period of five days by a team of volunteers and Kew staff and consist of Pansy ‘Light Blue’, Viola ‘Clear Yellow’, Viola ‘Black Delight’, apple mint and Viola ‘Red Blotch’ plants. They will be in full flower for the summer and will be visible from the Heathrow flight path.

In addition, to celebrate the UK’s role in the birth of the modern Olympic movement, a total of 40 ‘Coubertin Oaks’ oak trees are being planted at venues around the UK.

Trees grown from acorns taken from an oak planted in 1890 during the visit of the founder of the modern Olympic movement, Pierre de Coubertin, to the Wenlock Olympian Games will be planted at Kew Gardens, William Brookes School in Much Wenlock, Shropshire, the Forestry Commission’s National Arboretum and 26 schools that are part of London 2012’s education program.

Meanwhile, IOC president Jacques Rogge has used the 100 days to go milestone to express his confidence in organisers ahead of their final preparations.

“Organising the Olympics is a team effort and over the next hundred days, people from all walks of life and from all around the world will play their part in helping to make London 2012 a Games that will inspire a generation,” he said.

“From the athletes refining their technique, to the volunteers learning about their roles, to the torchbearers carrying the Olympic flame and the people supporting them as they go, each and every one of them is playing their part in making these a Games to remember.

“Around the world, the excitement is growing and expectations are high but I am confident that Britain and London will deliver a great sporting event and a warm welcome too.”