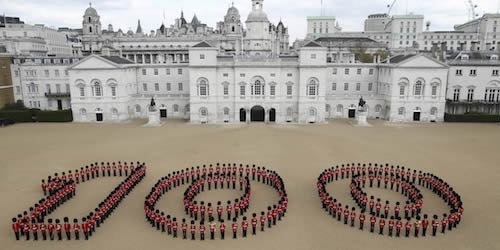 London 2012 have unveiled their official slogan for this summer’s Games – Inspire A Generation.

Organising committee chairman Seb Coe and chief executive Paul Deighton made the announcement at a ceremony at Kew Gardens and unveiled a set of giant Olympic ring shaped flower beds, which will be visible from the Heathrow flight path.

Organisers have left it late to reveal their slogan with just over three months to go until the opening ceremony on July 27th.

Putting aside those cynics who claim that ‘higher, busier, costlier’ would be appropriate, the slogan remains one of the most important branding exercises that Lord Coe’s Locog will undertake.

Recent Olympic history gives some interesting precedents, Beijing had ‘One World, One Dream’ while Turin, hosts of the 2006 Winter Games, came up with the vague but Olympian sounding ‘Passion Lives Here’.

Athens, birthplace of the Olympics, had the simple ‘Welcome Home’ in 2004 while Vancouver 2010 used the Canadian national anthem as the inspiration for ‘With Glowing Hearts’ and ‘Des Plus Brilliant Exploits’.

“With 100 days to go to the start of the Games, millions of people are getting ready to do the best work of their lives and welcome the world this summer. Expectations are high and we won’t disappoint,” said Coe.

However, a poll commissioned by the BBC to mark the 100 day to go milestone has revealed that two thirds of people across the UK think the Games, whose budget has soared to £9.3 billion, are costing too much.

Just over half believe the Games will deliver a lasting legacy, a key commitment when Coe’s team won the bid in 2005, and that number falls dramatically the further you move from the capital.

But Coe, a double Olympic champion, believes the arrival of the Olympic flame – which will travel within ten miles of 95 percent of the population – next month could ignite any latent interest.

“Every organising committee will tell you that in the lead-up to the Games you don’t need to force feed people with unnatural levels of excitement,” he said. “The start of the torch relay traditionally unleashes a level of excitement that people don’t even realise now.

“Of course, we feel a big responsibility. We want to deliver a Games for the whole country and the 200 nations who are coming here to embrace the greatest spectacle of sport that man has ever created.”