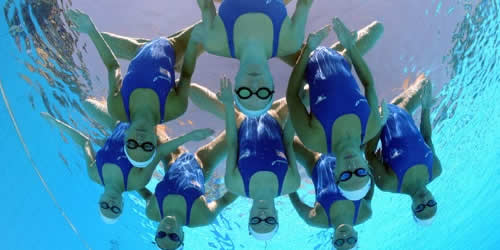 They are the undisputed glamour girls of the British Olympic team – one has even been dubbed the ‘official legs of the Games’ – but if medals were were awarded for sheer hardwork they’d be podium girls too.

It’s the culmination of an Olympic cycle that has seen over 9,000 training hours invested into two five minute routines this summer.

And the boy who never grew up is a perfect inspiration for a team that is on the rise and maturing with every international outing.

“A working week for most people is maybe 38 hours, so these girls are exercising more than most people are working.

“We work with the team day in, day out. It’s six days a week, every week and the girls also live with each other.

“I’m not sure what other Olympic sport does so much training. It’s so physical and it’s so technical and you’ve got to get eight people to exactly the same level of perfection.”

When synchronised swimming made its Olympic debut in 1984 it was the butt of many a joke, sharing the flack equally with rhythmic gymnastics.

They said sports stars weren’t meant to smile as a prerequisite of performance. Fans, it seemed, preferred scowls and snarls.

But no-one is laughing anymore. Olympic syncho tickets were among the first to sell-out and Carlsen believes the sport has benefitted from the profile of TV shows such as Dancing on Ice and Strictly Come Dancing.

“I think shows like that help the popularity of artistic sports like ours, people love the sport and the performance side of it and it’s a great audience for us,” she said.

“I think people understand the difficulty involved and the amount of hours training that goes into routines because they watch those programmes.”

This week’s test event will give Carlsen and performance director Biz Price, a Canadian who has revolutionised Britain’s standing in the sport since crossing the Atlantic nearly five years ago, the chance to cast their eye over both their team and duet.

Olivia Federici and Jenna Randall were 14th in Beijing and have high hopes of cracking the top six in London, after finishing eighth at last year’s World Championship in Shanghai.

Randall is the one with the model looks, although only the foolish would doubt her steely blonde ambition.

But this is the first time Great Britain have qualified for the team event – thanks to a host nation quota place – and with the finalised squad selection yet to be made, the test event will be key to Olympic aspirations.

“We started the season with 13 athletes in the team and that is down to ten now,” added Carlsen.

“Next month we’ll whittle it down to nine and we’ll take eight and a reserve to the Olympics.

“It’s a very young squad with an average age of 20 and all of them should be around in 2016 and some might be looking to the 2020 Olympics as well.

“We only started competing as a team in 2009 and we’re already ranked ninth in the world.

“Our motto is to improve every day and to show progression at every single competition. We do have a reputation now being one of the fastest rising countries in the sport ever.

“UK Sport have identified our training programme as being on the same level as British Cycling, we’re just not achieving the same medals yet.”

But success in synchro takes time, judges get to know you over a period of seasons, they want to see improvements and reputations are hard won and, sometimes, harder to lose. Russia remain the dominant force, winning all available gold medals at the Sydney, Athens and Beijing Games.

Which is why British coaches have looked to Miermont and Cousins for their expert advice and counsel, in the hope they can make a difference in a subjective sport were fractions count.

“Robin is considered part of the team now, he’s been in so many times helping with choreography and performance and is a mentor to the athletes,” said Carlsen.

“He’s showed us how they do lifts in ice skating and how we can transfer that into the water with grips and the way that we lift.

“He brought in an ice skater from Dancing on Ice to teach us and our lifts this year are quite different and it is certainly an area we needed to improve on.”

Great Britain are assured their Olympic place but with just eight nations able to compete in the team competition, this week’s test event will see Russia, Spain, Japan, the USA and the Ukraine battle it out to join Team GB, China, Canada, Australia and Egypt in the line-up.

And that means tears – not just smiles – are guaranteed.