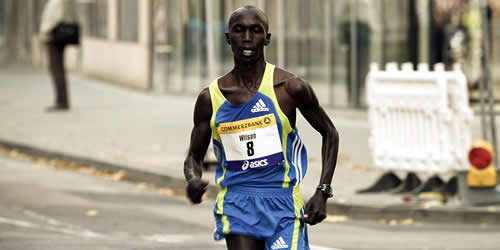 Wilson Kipsang dominated the race from the halfway stage Photo: clindstedt, via Flickr

It was a Kenyan double in the 2012 Virgin London Marathon as Wilson Kipsang and Mary Keitany stormed to victory.

Kipsang, 30, dominated the race from the halfway stage and was in sight of a new course record time but his finishing time of two hours, four minutes, 44seconds fell four seconds short of 2011 champion Emmanuel Mutai’s record.

He finished two minutes ahead of countryman Martin Lel, who crossed the line in two hours, six minutes, 52 seconds in a thrilling sprint finish ahead of Ethiopia’s Tsegaye Kebede.

Kipsang added to the title he won in Frankfurt with his first London win and also sealed his qualification for the Games.

The diminutive Kenyan broke away from the group at around the 20 mile stage and sprinted home to beat Catherine Ndereba’s record of two hours, 18 minutes, 47 seconds and also set a new Kenya national record.

She finished strongly, running mile 23 in just five minutes, while Edna Kiplaget finished in second place with a time of two hours, 19 minutes and 50 seconds.

David Weir gave himself the perfect preparation for the Paralympics as he equalled Tanni Grey-Thompson’s record of six wins at the London Marathon.

He executed a perfect sprint finish with 500 metres to go and stormed past Marcel Hug to finish with a time of one hour, 32 minutes, 23 seconds

British number one Shelly Woods dominated from the start in the women’s wheelchair race, eventually storming home in one hour, 49 minutes and 10 seconds, to pick up the title.

The race, in perfect sunny conditions, saw 35,970 amateurs going through the start line.