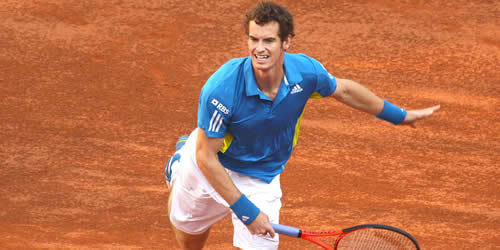 Andy Murray made his return to clay in Monte Carlo this week for the first time since his best-ever performance on the red dirt at the French Open last year.

In Paris, he reached the semi-finals and, although he lost to Rafael Nadal, it marked the culmination of a fine clay season. He had come close to beating Nadal in the Monte Carlo semis, though hampered by a sore elbow, and almost halted Novak Djokovic in the semis of the Rome Masters: He lost a final-set tie-breaker.

Murray made a strong start to his 2012 hard-court season, too—a win in Auckland, the semis of the Australian Open, and finals in Dubai and Miami. That form, in combination with his three big semi-final clay finishes last year, meant it was a confident Murray who arrived for his opening match in the place where his clay credentials were first earned last year.

He was joined in Monte Carlo, for the first time clay-side, by eight-time Grand Slam champion, Ivan Lendl, a multiple clay title-winner at Roland Garros, Rome, Barcelona and Monte Carlo. Such experience on the red stuff could only boost the Murray arsenal still more, judging from what seems to have become a coaching “marriage made in heaven.”

By chance, the last time Murray met his opening Monte Carlo opponent, Viktor Troicki, was in that last clay event, the French Open, more than 10 months ago, and it had been a nerve-jangling affair. Murray lost the first two sets before recovering to win the match, 7-5 in the fifth. The Serb rose to a career high No12 the same month, though he subsequently slipped to a current 30. But this match was, on paper, a tricky opener for the No3 seed in a very tricky half of the draw.

However, it was a clean-cut, sharp-looking Murray who took to Court Central in the heat of the midday sun. His hair, shorter even than the cropped look he sported for the North American swing, gave him an older, leaner look and his kit—a dark smoky grey edged with flame-orange—completed the crisp, business-like image that pervaded his tennis, too.

On clay, patience is a virtue like nowhere else. The rallies tend to be long on a surface where movement, balance, endurance and placement offer as many rewards as big power plays.

The second point illustrated this to perfection and set the tone for the match: a 37-stoke rally that Murray finally won with a rhythm-breaking drop-shot winner. He went on to break Troicki’s serve, playing comfortably inside his baseline with an ease of movement that countered all Troicki could produce.

Murray consolidated the break with a classy service game punctuated by a 30-shot rally and a couple of aces. He led 2-0 and was already in a comfortable groove.

He then took apart Troicki’s next service game to love with a combination of carefully-woven ground strokes and devastating drop shots.

By 4-0, Troicki had won only three points. He earned a game point in the fifth but it was quickly snuffed out, and Murray went on to serve out the set, 6-0.

The stats, had Troicki seen them, painted a devastating picture: Murray won
10 out of 11 points on his first serve, scored nine winners to the Serb’s two, and took a soul-destroying 74 per cent of the set’s points. The question was, could Troicki find anything to break up Murray’s near-perfect rhythm?

In the opening game of the second set, it looked as though he could: Troicki hit more winners than in the entire first set and won his first game of the match. But come his second service game, and Murray’s metronomic placement of the ball and brick-wall defence broke the Serb again.

Troicki, for the first time in the match, won the first point on a Murray service game in the eighth but could not win another, and the Scot pressed home his advantage in the ninth game with a touch-perfect sequence of sliced drop shots and backhands to break the Serb for the set and match, 6-3.

Murray’s first serve stats hit a remarkable 82 per cent—and he dropped only two points from those first serves in the match. Troicki never came close to earning a break point and ended the match with just a third of the points.

Murray looked and sounded as chilled after the match as he had before it began: “It was a good start. Normally it takes me a few matches to get used to the clay but today I thought I moved pretty well from the start.”

And asked about the impact of his clay success in 2011, he summed it up quite simply: “I gained a lot of confidence even though I lost those matches [to the top guys]. That was it, confidence.”

This, though, was just the first step, albeit an impressive one, in pursuit of that first clay final. He will still, almost certainly, have to answer the same questions he was posed in 2011—from Djokovic in the semis and Nadal in the final. But he is looking, on all fronts, in better shape than when he lost, just, to both of them almost 12 months ago.

He pointed out that: “I don’t move as naturally on clay as on other surfaces, so I need to be patient.” And then he added, with a smile: “I like trying to prove people wrong, so that’s my goal this year.”

Whether the “goal” is a clay title or a Grand Slam, “people” will have to wait to find out.

I rejoined Barcelona to play in games like these, says Fàbregas