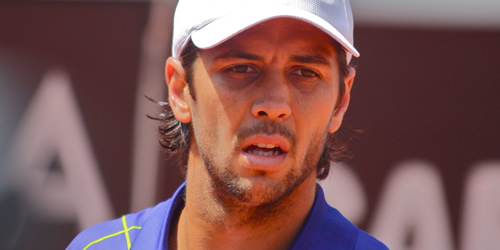 Fernando Verdasco was a finalist in Monte Carlo in 2010 Photo: Marianne Bevis

One name has become synonymous with the Monte Carlo Masters – and it is a Spanish one.

Rafael Nadal has not been defeated on the clay of this most picturesque of tournaments since he burst into tennis’s hierarchy with his first Masters title here in 2005.

Come this Wednesday, the world No2 will open his campaign to win his eighth straight title in the principality on the Med. Should he succeed, it will be his first Masters crown since he won here last year, his first title of any kind—apart from the Davis Cup—since the French Open last June, and would once again take him ahead of Roger Federer in the record book of Masters titles.

But until Wednesday, he remains simply one in a vast array of Spanish players who are slipping and sliding their way across the orange grit of the Monte Carlo Country Club.

For Spain is a treasure-chest when it comes to tennis: The top 100 contains 11 men, and nine of them are playing in this week’s 56-strong draw.

No surprise, either, that Spain is well represented in the first clay Masters of the season: This is a surface that fits not just Nadal but most of his compatriots like a glove.

However, the Spanish melting pot of talent—and five of the nine in Monte Carlo are amongst the 16 seeds—should not, perhaps, be too readily pigeon-holed.

Bucking statistics, four of the nine are left-handers.

One of them, along with two of the right-handers, uses a single-handed backhand.

One of them, along with two different compatriots, has already turned 30.

And an impressive proportion of the nine is playing better than ever before.

Feliciano Lopez, one of those 30-year-olds, broke the top 15 for the first time last month. Nicolas Almagro, aged 26, broke into the top 10 for the first time a year ago and has not dropped out of the top 12 since last July. Marcel Granollers entered the top 30 as 2011 turned to 2012 and celebrated his 26th birthday last week at No25.

Albert Ramos, the youngest of the group at 24, has just reached a career-high of 42 after reaching his first ATP final in Casablanca, and the man who beat him in Morocco, Pablo Andujar, jumped 19 places to a high of No39.

And it is not just the clay that brings success to Spain. David Ferrer, 30 just a fortnight ago, is enjoying a renaissance: No6 in the world, one of only two men to have won three titles this year, and a record that boasts titles on hard courts, indoors and even on grass. He, like Nadal, Lopez and Fernando Verdasco, are far from one-trick-ponies when it comes to surface.

That aside, the ‘Armada’ has already shown its terracotta colours in Monte Carlo. Verdasco, a finalist here in 2010, struggled with form and confidence last year and has slipped from No7 exactly three years ago to 27 this February. There have, though, been signs of a turn: The strapping left-hander reached his first final since last July—Gstaad—at the Acapulco 500 last month.

His first-round match was against the 31-year-old Olivier Rochus, whose diminutive 5ft 6in may have been more to blame for his failure to break the top-20 than any lack of talent. In the first set, he exposed every weakness in the Verdasco game—patchy, over-ambitious and inconsistent.

Rochus, who compensates for his lack of big serve and winning shot with mobility, tactics and touch, applied pressure to the weaker Verdasco backhand, played acute angles and delightful drop shots that tested a heavily-strapped Verdasco left knee: Rochus took the first set, 6-4.

The Spaniard continued to fire full-blooded forehands—and missed as many as he made. Veering between brilliant and impatient, he nevertheless managed to stay with Rochus in the second set, taking it 6-2, and then looked destined to play a third-set tie-break until he unleashed a sequence of forehand winners to break Rochus and take the match, 7-5.

It was the kind of finish, after more than two hours of tough tennis, that should restore the fluctuating Verdasco confidence, and he will need it—in his second match in as many days—against Ivan Dodig.

In an altogether different Spanish mould, the 5ft 9in Albert Montanes, at a four-year low of 71 in the rankings and with wins in only one tournament from seven played this year, appeared to have little chance against the huge physique and game of Milos Raonic. But the 31-year-old chose the Centre Court at Monte Carlo to produce some delightful and varied tennis that prevented the No24-ranked Canadian from ever settling.

In particular, Montanes’ single-handed backhand worked miracles, finding acute cross-court angles and repeated down-the-line winners. He broke twice in the first set to lead 6-2, and broke first in the second, but Raonic broke back twice to take the second set, 6-3.

Montanes has twice retired from tournaments with injury this spring and, with a third set, the safe money was on Raonic to run him into the ground. But the Spaniard continued to defend well against his opponent’s huge serve and mixed up his game with drops and volleys to snatch the match, 6-3. Whether those legs can carry Montanes past the athletic Janko Tipsarevic and, after that, the battery-powered Gilles Simon is another question.

The gangly, inelegant, 6ft 3in Granollers was the third Spaniard in first-day action. Looks can be deceiving, and he mixed things up well against the all-court tennis of another 30-year old, Frenchman Julien Benneteau. It took more than two hours and three sets to separate them—and, in the end, Granollers could not quite out-play his opponent—but for entertainment, their match was the equal of the afternoon’s other two three-setters.

Which begs the question: Just how good will the tennis become when the higher-ranked Spaniards take to court? Judging from day two’s fascinating clash between Lopez and Stan Wawrinka, things look destined to get even better—and then Nadal, Ferrer and Almagro set sail on day three.