Saracens ready to bounce back from Wembley woe – De Kock 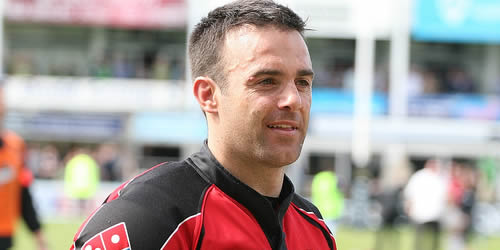 A win for Saracens would have seen them replace Conor O’Shea’s troops at the top of the table but now they are six points adrift and tied with Leicester on 60 points with three games remaining.

But South African de Kock believes it would be a very different story should the sides clash again in the Aviva Premiership final on May 26.

He said: “If you actually look at the game we did a lot of the attacking in the second half but fair credit to Quins, we created a lot of opportunities but they held on.

“If we attack like that again we would score tries but the one thing that was lacking in our performance was our physicality.

“That was the area they dominated and in truth we got run over by them.

“But I don’t think they landed any sort of psychological blow. If you look at the last couple of seasons, we have always reacted well to disappointment.

“We learn quickly and move on quickly. We can’t afford to dwell on it because we have four massive games coming up – our three remaining Premiership games are like play-offs for us to get that home semi-final.

“Who knows where we will both finish. But if we do play them again it will be different.”

There is little time for Saracens to feel sorry for themselves with their second huge game in the space of eight days: a Heineken Cup quarter-final at home to Clermont.

As the Aviva Premiership’s remaining flag-bearers in the competition, de Kock maintains the perfect way to put their Wembley woe behind them is by responding against the French giants.

“We can’t afford our physicality levels to be at the same level again,” said de Kock, who missed three months of the season with a stress fracture of his arm.

“Clermont are a big bunch of guys who try to get over the gainline, so first-time tackles are going to be crucial.

“That defence is what we pride ourselves on and we have to bring that on Sunday.”

If you buy a ticket for this year’s Aviva Premiership Final on 26 May you will receive a free rugby shirt. Go to www.premiershiprugby.com/freeshirt to buy yours