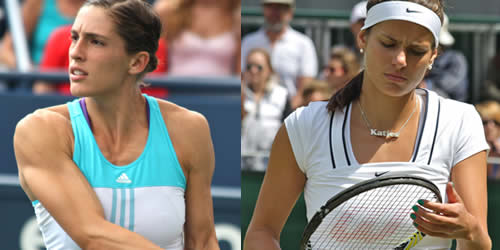 Everything about the only German tournament on the women’s tour whispers understated class.

From the sophisticated design of its website to the redolent name of its sponsor—the clue is in the name, the Porsche Tennis Grand Prix—this event is a cut above.

Played out inside the elegant Porsche Arena, this is the only indoor clay event of the year—and it’s no ordinary clay, either. The court is just an inch thick, is built with Swiss technology and is levelled to perfection with lasers. And the oil used in the terracotta mix requires no water and creates no surface dust. The words “vorsprung durch technik” spring to mind, except that the prize for the winner in Stuttgart is, of course, a Porsche.

Little wonder, then, that the players on the WTA Tour voted this their favourite tournament in 2007, 2008 and 2010. Little wonder, too, that the very best women are in competition, including the top eight in the world and 16 of the top 20.

Leading the field is world No1, Victoria Azarenka, playing for the first time since she lost in the quarter-finals of Miami, a loss that brought to an end the Belarus star’s 26-0 start to the season. In Stuttgart, she will attempt to win only her second title on this surface: Her first came in Marbella last year.

For the second seed, Maria Sharapova, Stuttgart is her first tournament in Germany since Berlin in 2005. And like Azarenka, clay is her least successful surface—just three titles out of 24.

With three runners-up finishes at the Australian Open, Indian Wells and Miami, Sharapova is looking for her first 2012 title. She created a huge media stir last week with a photo of a new bobbed hairstyle, only to reveal that it was a wig worn during a photoshoot. She has the chance to cause a bigger stir if she takes advantage of the relatively quick indoor conditions in Stuttgart to close the gap on Azarenka—and on the No1 ranking she last held four years ago.

If Azarenka has been the player of 2012, No3 Petra Kvitova was the woman of 2011, winning six titles including Wimbledon and the WTA Championships. She has yet to win a title this year, though she reached the quarters at the Australian Open and last week helped the Czech Republic to the top of the Fed Cup rankings and the 2012 final.

Kvitova will now have to fend off the advancing Agnieszka Radwanska, at a career high of No4 and already with two titles this year, including the big Premier in Miami.

The popular Pole should feel very at home in Stuttgart: She lived in Germany for a few years as a child and is good friends with German players Angelique Kerber and Sabine Lisicki. It is, though, two other Germans who loom in Radwanska’s half of the draw—and that pulls into sharp focus the remarkable rise of German women on the tennis stage.

At the start of 2011, there were no Germans in the top 30 and no German player had reached a Grand Slam quarter-final in almost five years. Now there are four of them for the first time since 1988, when the idol of most of the current crop, Steffi Graf, was in full pomp.

The first of the new wave to catch the eye was the statuesque Andrea Petkovic who came of age with the title in Strasbourg, a final in Brisbane and three Grand Slam quarter-finals. It took her from No32 in the world to No9 and, as if that wasn’t enough, she even threw in a dance after each win. But she was hit by a knee injury at the end of 2011 and then by a back injury before the Australian Open.

Petkovic made her first return in the Porsche arena at last week’s Fed Cup tie against Australia and, despite losing, it gave her some valuable court time on the clay. Now ranked at No12, she needed to stay fit to make inroads through Madrid and Rome, but in her second-round Stuttgart match against Azarenka, disaster struck once again, and she crashed in the second set with an injured ankle.

The Porsche strap-line around the court of its eponymous arena is “intelligent performance”, a strap-line that suits the German women, too. Petkovic speaks four languages and claims Goethe and Wilde as her favourite authors while, one below her in the rankings, Lisicki is the mistress of three languages.

The extrovert Lisicki bounced back from a year of injury in 2010 to reach the semi-finals at Wimbledon. From a ranking of 218 at Indian Wells, she rose by the end of the year to 15, but was then hit by injury again in Charleston and misses Stuttgart, too.

One place behind Lisicki, at 14, is the newest German arrival in the top 20. The multilingual Kerber was barely inside the top 100 when she made a stunning run to the semis at the US Open and she finished 2011 at 32.

And in 2012, the left-handed 24-year-old has shown that New York was no flash in the pan: First came a title in Paris and then her second title in Copenhagen, which ended Caroline’s Wozniacki’s 14-0 run at her home tournament.

Kerber has now reached the semis or better in seven events since the US Open to take her to No14. As luck would have it, she finds Wozniacki waiting in Stuttgart’s second round, but she has room to make big points during the spring and summer. So Kerber may even rise above her compatriots before she arrives back where it all started in New York.

The rise of the fourth German, Julia Goerges, began in earnest at this event last year where her big-hitting tennis beat Wozniacki to win her first Premier title. The German built on her success through the clay season to end the year at 21. This year, however, she was beaten in Stuttgart’s second round by an in-form Sam Stosur and may soon be overtaken by possibly the most talented of all the Germans in the draw.

Twenty-one-year-old Mona Barthel, who completed her academic studies before focusing full-time on tennis, was just inside the top 200 a year ago, began 2012 at No69 and, with her first WTA title in the bag, is already up to 35—and 17 in the race to the WTA Championships. Her success earned her a Stuttgart wild card and she repaid the home crowd in spades, first by beating Ana Ivanovic and then, her first top-10 scalp, Marion Bartoli.

The tall, almost balletic figure of Barthel seems to have the ideal shot-making combination of fluidity, timing and power—all delivered with the kind of calm intelligence that promises still more. She conceded just four games to Bartoli, hitting 36 winners in only 16 games.

Barthel will, in all likelihood, face Azarenka in the next round for the fourth time this year. She lost the first two matches easily but in the last, at Indian Wells, she lost by the narrowest of margins, 4-6, 7-6, 6-7. The newest German woman to join the top table may not beat the best woman in the world this time but she is within touching distance of a seeding for the French Open—and must surely be a contender to break the top 10 before 2012 is done.