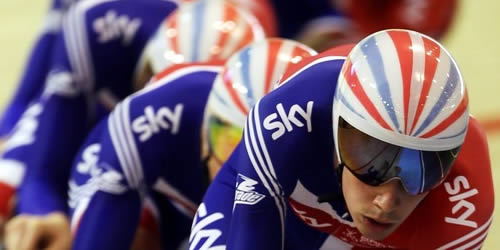 Great Britain issued the most uncompromising statement of London 2012 intent by taking World Championship team pursuit gold in a world record time in Melbourne – upstaging hosts Australia in the process.

The GB quartet had hinted at the form they were in by recording the third-fastest time in history in qualifying but they took it up to another level in the final.

After having to settle for silver in the London World Cup – finishing over two-and-a-half seconds down on their Australian rivals – the GB squad were in imperious form on their way to a world record time of 3.53.295 seconds.

Steven Burke replaced Andy Tennant in the GB four for the final but the victory was built around Beijing Olympic gold medallist Ed Clancy who produced a monumental effort early on to set the tone for the win.

Despite Clancy’s early effort it was neck and neck at the halfway point with just 0.069 seconds separating the teams, however thereafter the GB quartet showed their class, opening up a 0.8 second lead heading into the final 500m.

The hosts came back in those closing stages but it wasn’t enough to stop the GB quartet taking their fourth ever World Championship team pursuit gold.

New Zealand took bronze, edging out Russia to complete the podium, but the GB squad ensured day one belonged to them after upstaging the hosts in their back yard.