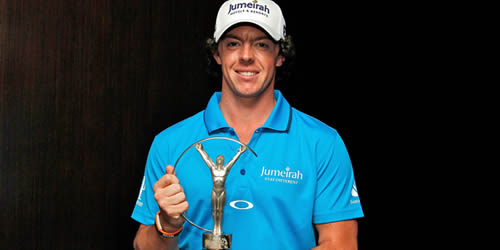 The date is the first week in April. The location, the Augusta National Golf Club, is one of the most beautiful in sport. The competition is probably the most prestigious in golf.

And even amongst those who are not aficionados of that small, pitted white ball, it is known, quite simply, as The Masters.

While the best players in the world do not begin their four-day, four-round campaign for the Green Jacket until Thursday, already the pristine lawns—decorated by pale golden bowls of sand and patterned by bottle-green shadows from the lush wooded fringes—are alive with the quiet bustle of practice rounds.

Among them is a young man who, almost one year ago, looked destined to take the Masters by storm when he led the 75th playing of the Augusta tournament by four shots at the start of the final day. But for Northern Ireland’s Rory McIlroy, then just 21 years old, it all fell apart with a disastrous final round of 80.

Since then, fortune has been much kinder to the popular young man who has found himself in the limelight as much at tennis events as golfing ones.

Because since April 2011, McIlroy has not only won the US Open—with a record score of 16-under-par and a record total of 268—and enjoyed the No1 ranking for two weeks last month, but he has become, with former No1 tennis player Caroline Wozniacki, half of one of the most endearing couples in sport. Never, it seems, are they anything by wreathed in smiles.

McIlroy’s success also brought him into the spotlight at the 2012 Laureus World Sports Awards, regarded as the Oscars of sporting achievement, where he won World Breakthrough of the Year Award. And it is from Laureus Academy member and three-time Masters champion, Gary Player, that the latest accolade has come.

Player, one of only five men to win golf’s Grand Slam of the four major championships, has tipped McIlroy for victory in Augusta in his daily blog about the Masters for the Laureus website.

“I have to favour Rory McIlory this year,” he said. “You remember last year he was leading and he had that collapse in the final round with an 80. I think Rory has a little revenge in his heart for the golf course.

“The way he recovered from that upset a couple of months later at the US Open showed what maturity he has. The disappointment might have seriously affected a less mentally strong young man.”

Player also thinks Tiger Woods, four-time Masters champion, will be a major force after his recent victory in the Arnold Palmer Invitational, where he ended a 30-month title drought.

“It’s the first time I’ve seen him drive the ball well in a long time. He’s going to be very, very tough at Augusta. He knows the course, he’s confident, he’s had a tough time for two years and he’s very hungry.

“He is a man with such focus and dedication and hunger, I don’t see anyone else quite like that in the game of golf today.”

Woods is the favourite with many bookmakers, too, but there are other players finding good form as just the right time.

Hunter Mahan became the first player to score multiple wins on the PGA tour this year with a one-stroke victory at the Houston Open last week, taking him to No4 in the rankings.

2010 Masters champion Phil Mickelson took his 40th title on the US circuit at the Pebble Beach National Pro-Am in February.

Player added a couple more names to the list, too:

“Luke Donald is No1 in the world right now and these greens are just made for him. And there are a host of guys, including Charl Schwartzel, the defending champion, who I expect to be in contention. Charl is a very consistent golfer and that’s the hallmark of a champion. It would not surprise me to see him excel.”

There could be two factors that may make the crucial difference for McIlroy this year, though. He comes into the Masters knowing, after his remarkable come-back at the US open last year, that he can lead from the front and stay there—and confidence and self-belief are vital components in a sport that comes down, simply, to the man hitting the ball.

McIlroy is also, it seems from recent comments by Wozniacki in The Telegraph, a physically stronger man this year. The couple jogs together and occasionally works the gym together. He was even tempted onto court at Madison Square Gardens last month to rally with Wozniacki and Maria Sharapova at an exhibition event.

Small things maybe, but with one of golf’s most renowned champions tipping McIlroy for success this time around, it’s worth paying heed.

Read Player’s Masters preview on the Laureus website and follow his daily blog from Thursday (5 April) as the Championship gets under way.