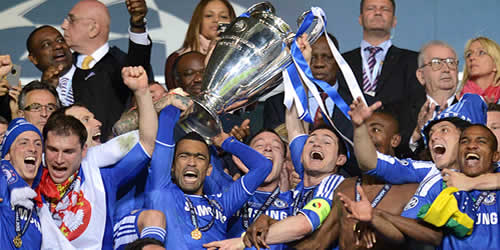 Alex Oxlade-Chamberlain admitted Chelsea’s dramatic victory over Bayern Munich in the Champions League final on penalties will prove a source of inspiration for the Arsenal midfielder to win titles with club and country.

Here, we take a look at some more reaction from Twitter following Chelsea’s crowning as kings of Europe.

Arsenal and England midfielder Alex Oxlade-Chamberlain: “What I’ve witnessed tonight has inspired me to try and help both club and country achieve great things.”

Arsenal midfielder Jack Wilshere: “Every English man should be proud of Chelsea! Even Arsenal and Spurs fans! What a season it was!”

Gunners defender Bacary Sagna: “Looking at them just wanna make me celebrate something with my team as well.”

Sunderland centre-half Titus Bramble: “I don’t care what anyone says about Drogba, for years he’s made Chelsea what they are.”

Former Arsenal striker Ian Wright: “Drogba is amazing!! Redeemed himself for the sending off against United. Brilliant.”

Ex-Liverpool and Manchester United striker Michael Owen: “Their name was written on it long before today! Congratulations Chelsea.”

Former England and Everton goalkeeper Nigel Martyn: “Cech’s second penalty save from Schweinsteiger was class but barely got a mention #keepersunion”

Queens Park Rangers captain Joseph Barton: “Horrible way to lose on penalties but great for the neutral. Feel nothing for the Germans as they have won more than enough shoot-outs.”

Barton added: “Will all the subs and fringe players please leave the trophy alone! Let the chaps lift it. Happy for Lampard and co.”

Champions League winner Luis Garcia: “Great game, exciting until the end. Congratulations to Chelsea and the Spanish players are there.”

Former Coventry City striker Darren Huckerby: “Love him or hate him Drogba has been immense for Chelsea over the years #ManMountain”

Ex-Chelsea defender Khalid Boulahrouz: “What a match! Congrats to @chelseafc on winning the #championsleague 2012. And also fans of the Blues. Enjoy!”

Other sport stars have their say:

England bowler Stuart Broad: “I’ve never seen a captain struggle to get to the front of his players to lift a trophy like that before!!”

Former England cricket captain and Chelsea supporter Alec Stewart: “Thank you for all your great tweets. Unbelievable game and result. Champions of Europe. The blue flag is flying high! #Championsofeurope”

Rugby World Cup winner Matt Dawson: “2012 is going to be an epic British sporting year. And it won’t be last time we nick it from the Germans! #onyourbike”