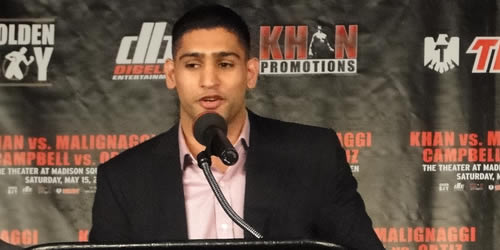 Amir Khan's bout with Lamont Peterson was called off this week Photo: SportsAngle.com, via Flickr

Amir Khan’s rematch with Lamont Peterson for the WBA and IBF light-welterweight titles has been officially cancelled, following the American’s failed drug test.

The Briton’s US promoter, Richard Schaefer, CEO of Golden Boy Promotions, revealed on Wednesday that Peterson tested positive for synthetic testosterone back in March after both fighters agreed to random drug testing by the Voluntary Anti-Doping Association (Vada) before their bout in Las Vegas on 19 May.

Khan took to Twitter just before midnight on Wednesday to break the news that the fight has been called off, stating that Peterson was entirely to blame for its cancellation, before revealing that he would find an opponent to face him at the end of June.

The Brit posted: “The fight is off! sorry everyone the only person to blame is @kingpete26 [Peterson]. I’ll be looking for an opponent to fight June 30”.

The 25-year-old from Bolton then told Sky Sports News: “First of all I’m disappointed because I trained very hard for this fight.

“It was a big shock for me. My head was all over the place, I really, really wanted to win my titles back and have the fight.

“But the truth’s come out now and it just proves that Lamont Peterson was a cheat really.

“I’m looking at fighting on 30 June. I’ve got a meeting with Golden Boy Promotions over the next few days and hopefully we’ll set a date.”

Keith Kizner, executive director of the Nevada State Athletic Commission, revealed that he intended to advise the board to refuse Peterson a licence to fight Khan, with the result of their earlier meeting in Peterson’s hometown of Washington last December almost certain to be annulled.

Speaking to RingTV.com, Kizner said: “Unless there’s some real obvious and legitimate reason for the positive test, he’s not fighting.

“Jeff Fried said that it was ‘testosterone pellets’. What I understand that to be, although I’m not a doctor, is that it’s almost like a semi-solid that you kind of put underneath your armpit, and then the heat of your body kind of allows it to soak your glands.”

An estimated 4,000 British fans had booked flights, hotels and tickets to support Khan in the bout as he sought to reclaim his belts.

Despite the revelations, Peterson’s team have insisted that he is not a drugs cheat. His publicist Andre Johnson also spoke to Sky Sports News, saying: “Lamont is not a cheat. He is not a steroid abuser. There’s no evidence of anabolic steroid abuse in his body or in his system,” he said.

“He’s not a doper. He’s not a cheater. He’s distraught. He wanted to clear his name and do what he was born to do – fight.”