Fans of Gloucester are declared the Aviva Premiership's most passionate fans, according to a new study 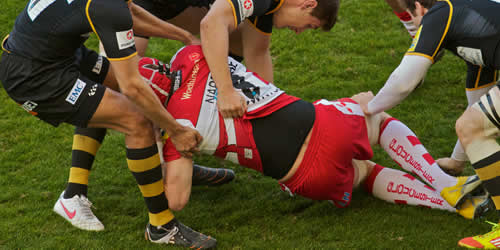 All-action Gloucester No8 Luke Narraway might be famed for his on-field passion – but a scientific study has found that the back-rower is more than matched in his psychological will to win by the Gloucester faithful.

Scientists have conducted a season-long experiment of all 12 Aviva Premiership rugby clubs’ fans – monitoring heart rates, their anxiety levels and hormone release through saliva during matches.

And while the Cherry and Whites might have struggled to challenge the Premiership big boys on the field, the Shed faithful have more than held their own – topping the table in the passion stakes.

In one example, an Exeter Chiefs fan saw his heart rate reach 200 beats per minute – the typical resting heart rate is 60-80 – in his side’s last-gasp 31-26 win over Worcester last month.

And so while Narraway and co. seemingly take the brunt of the work-out on the field the notion of a relaxing afternoon out at the rugby for the Gloucester fans has been blown out of the water.

“Some of the surges in heart rate and testosterone are the biggest we have seen,” said Dr. Mark Brosnan, director of research for psychology at the University of Bath.

“All the tests were formulated and set up to give the best indication of the stresses and emotions fans go through when watching a game of rugby.

“There’s no doubt that the more passionate you are about a team, the more involved you will be on an emotional level – and this is exactly what this experiment found. We were surprised by just how passionate some of the fans were.”

And Gloucester rugby stalwart Andy Hazell said: “I’m a Gloucester lad born and bred, and it’s fantastic that our fans here at Kingsholm have been recognised as the Aviva Premiership’s most passionate fans.

“We’ve known it here for ages – but it’s great to get the official stamp of approval from the scientists at the University of Bath. The support our fans give us week-in week-out is simply incredible, and it has a huge impact on the lads out on the pitch”.