Sharethematch.com looks at the impact Carles Puyol's absence will have on Spain's bid to win Euro 2012 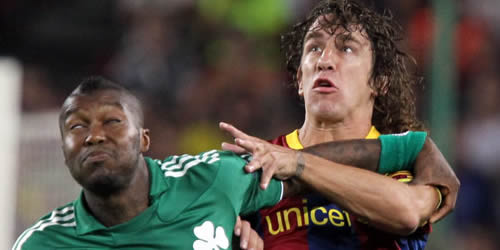 Puyol’s absence will be a blow to Spain

With the news Carles Puyol is set to miss Euro 2012 with a knee injury, Spain are looking increasingly fragile in their attempt to defend their European crown.

The Barcelona captain is set to be sidelined for six weeks, ruling him out of Vicente del Bosque’s plans with Spain’s opening match against Italy just over a month away.

El duro, as they call him in Catalunia, will be a huge miss for the world champions and his absence will be a serious setback in their bid to become the first team ever to win three successive major international tournaments.

Barça hadn’t lost a game with Puyol in the side for almost two years until Real Madrid triumphed at the Camp Nou last month, which says everything you need to know about the man’s ability.

If Spain are up against it in Poland and Ukraine, you wouldn’t fancy a central-defensive partnership of Gerard Pique and Sergio Ramos to throw themselves about and lead by example.

Puyol’s absence may just leave Del Bosque with a gaping hole in his armour, and his side are also looking a little bit light up-front.

David Villa, top scorer at Euro 2008 and the World Cup, has missed most of the season with a broken leg and even if he can regain full fitness he will be severely lacking in match sharpness.

The good news for Del Bosque is that Pedro is nearing his best form after an injury-plagued season, although several of his Barcelona team-mates have looked jaded in recent weeks.

Can the likes of Xavi and Andres Iniesta raise their game next month or will Germany and the Netherlands have too much for them?

Per Mertesacker has just been named in Germany’s preliminary 27-man squad for Euro 2012 – but it will be an amazing achievement if he is anywhere near a pitch this summer’s tournament.

The Arsenal defender has been selected by German coach Joachim Löw but surely he can’t be seriously contemplating keeping him on when he trims his squad to 23 on 29 May.

He has looked cumbersome, slow and very ordinary indeed since joining Arsenal – surely his signature at the Emirates was a reflection of Arsene Wenger’s desperation at the time.

And, perhaps more crucially, is that he has been out for pretty much an age with an ankle injury, so there is absolutely no way he can get picked, right?

The German players may have been left wondering who Roy Hodgson was last week but their coach could be left with pie on his face if he picks Mertesacker.