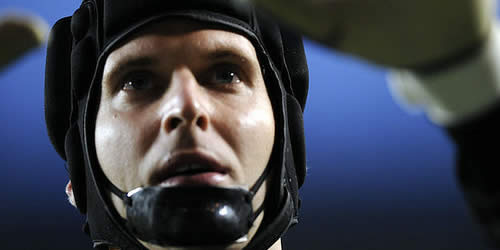 With all this talk about Eden Hazard, Chelsea supporters may have overlooked a quality bit of business – securing Petr Cech for another four years.

Probably vying for second place in the all-time Premier League goalkeeper list with Edwin van der Sar, and behind Peter Schmeichel, the Czech looks to have put a tricky few seasons behind him.

After bursting onto the scene in his first couple of seasons his head injury looked to have left him a shadow of his former self.

Formerly dominant in the air and brave at an oncoming striker’s feet, he looked in two minds in a lot of situations and less commanding of his area.

But the 30-year-old has looked back to his best this year by consistently producing decent performances during the abysmal Andre Villas-Boas era, and along with Didier Drogba and Frank Lampard has been an architect of Chelsea’s revival.

His save of the season contender in the FA Cup final from Andy Carroll may have been the turning point for Chelsea’s season.

With two crucial penalty saves in the Champions League final off former team-mate Arjen Robben and Ivica Olić, you could argue he won the Blues the cup.

Goalkeepers will forever be the most underrated football players, but in Cech, Chelsea – whose fans voted him their player of the season – know they have a gem.

Jagielka jibe is a breath of fresh air for England

It might not be the smartest way for Phil Jagielka to announce his arrival to his England team-mates but the Everton defender’s admittance that we’ve been shoddy for years is refreshing to hear for fans.

“We haven’t won anything for a number of years and maybe that’s because we didn’t deserve to,” said Jagielka after his call up.

With only eleven caps to his name, Jagielka isn’t exactly speaking for himself and you could understand if stalwarts like Frank Lampard and Wayne Rooney took offence.

But he would surely only go on record about England’s record if that was the true mood in the camp.

If realism really is taking hold in Roy Hodgson’s side then that is the first step to rectifying the years of hurt and should cheers the hearts of England supporters after years of disappointment.

Nigel de Jong is the answer to Arsenal’s midfield conundrum

Hazard: I watch videos of Messi and Ronaldo for inspiration