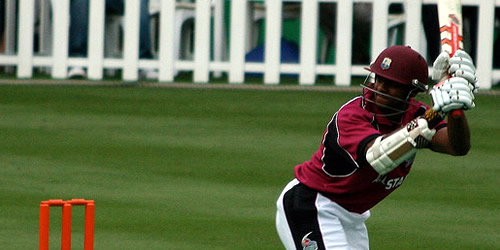 Shivnarine Chanderpaul has been a thorn in England’s side ever since he debuted against them as a wet-behind-the-ears 19-year-old back in 1994.

In that match the Lilliputian leftie made 62 in a crushing innings victory on his home ground in Guyana and 18 years later, with the glory days but a distant memory, he continues to cling on, limpet-like and resolute to the last.

He has been a near constant presence at the crease in contests between West Indies and England over the last three decades, particularly on these shores. In 2004 the Windies were whitewashed emphatically but Chanderpaul was steel personified, averaging 70 plus for the series, including 225 unbeaten runs at Lord’s.

Three years later, he was more or less immovable; going 1,074 minutes without being dismissed and averaging 148.66 in a series the tourists lost 3-0.

The first day of this series provided a familiar tale, with the 37-year-old digging deep and the West Indians showing flashes of brilliance – not least from their pocket-sized opener Adrian Barath, who carved England’s bowlers for nine boundaries on his way to 42 before throwing his wicket away with an ill-advised slash outside off stump – but ultimately failing to make the most of their opportunity on what looks a featherbed track by shooting themselves in the foot at crucial moments.

In truth, Chanderpaul was responsible for the worst piece of cricket of the day – selling Darren Bravo a dummy that left both batsmen at one end and resulted in Bravo’s dismissal just as a promising partnership was developing – but, that abomination aside, Barath and Marlon Samuels could learn a lot from watching the veteran at the crease after playing shots they will wish they hadn’t when well set.

Chanderpaul went about his business at Lord’s in the way that he always does: blocking or leaving anything that he judged to be remotely threatening and easing into anything loose, sending the ball to the boundary with exquisite, effortless timing.

He is often described as an ‘ugly’ batsman, but that does him a disservice. His crouched, awkward stance – which gives the impression he is about to receive a delivery from mid-wicket – may not be easy on the eye and it certainly won’t be found in any textbooks, but by the time the ball arrives he is perfectly still and in a position to play shots all round the wicket with the minimum of fuss.

Fresh off the back of a wonderful series against Australia that saw him reinstalled as the world’s No.1 Test batsman, Chanderpaul arrived in England in fine fettle and with plenty of runs behind him (more than 10,000 now in Tests – just the 10th batsman to achieve the milestone).

Arriving at the crease at 86-3 he began cautiously before showing signs of aggression against Graeme Swann, sweeping the spinner for four before driving him through mid-off in a manner that was anything but ugly.

But an all too familiar pattern was emerging as Samuels and Denesh Ramdin fell in quick succession to Stuart Broad, leaving Chanderpaul in his well-accustomed role of marshalling the tail. It’s a role he cannot relish but it is one he excels at and as his teammates flail at the other end, he looks ever less likely to get out.

And so it proved again today as Chanderpaul reached stumps unbeaten on 87 with only the No.11 Shannon Gabriel for support and his side 243-9 – a below-par effort on a batsman-friendly track that Andrew Strauss must have been tempted to bat first on. The vulnerability of the West Indies top-order would have been a significant factor in his decision after winning the toss and the England skipper will feel justified in his decision to put them in after what he has seen today.

England will sincerely be hoping it won’t take another 1,074 minutes to dismiss Chanderpaul in this series, but even it does, the West Indies’ frailties elsewhere mean it is unlikely to have an impact on the end result.