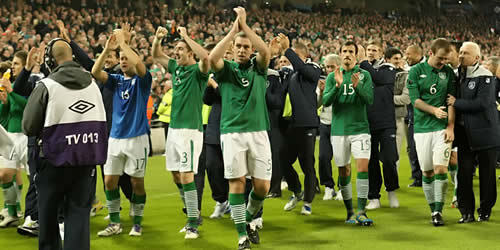 Kevin Foley admits he feels “betrayed” by Republic of Ireland manager Giovanni Trapattoni after the Wolverhampton Wanderers defender was omitted from the final 23-man squad for Euro 2012.

The 27-year-old defender had looked to be showing progress in his recovery from the problem and he says he was told he would be given a chance to prove his fitness at Ireland’s training camp in Italy this week.

But Trapattoni confirmed Foley did not make his 23-man list for the tournament in Poland and Ukraine on Tuesday.

Hull City defender Paul McShane has been confirmed as Foley’s replacement, just days after Keith Fahey was forced to withdraw from the squad with a groin injury and Paul Green called up.

“It is hard to take, you know. I sort of feel betrayed. I don’t want to go into too much detail. I just feel betrayed,” Foley told the Irish Times.

“I wanted to prove a point, that I was fit to play because from what I understood, I could have trained last week, Thursday, Friday and been involved in the game [against Bosnia on Saturday].

“He [Trapattoni] said there was no rush and we will wait to train in Italy, so I trained for two days in Italy and felt great. And then all of a sudden, he pulls me this morning just before the end and says, ‘You are not in the squad’, and that is hard to take.

“I have done everything I can. That is all I can do. Words can’t really describe it. It was tough.”

Trapattoni, who is no stranger to making tough calls after leaving Roberto Baggio out of his Italy squad for 2002 World Cup, revealed Ireland’s shortage of options in central defence played a part in his decision.

“It is difficult, not just for him but me also,” said Trapattoni.

“We had problems with John O’Shea, Richard Dunne, Seán St Ledger and Darren O’Dea; all of the central defenders had problems and we could not be sure that they would be 100 per cent.

“And so we needed another central defender in case some were injured or got red or yellow cards.

“It was a very difficult decision to make. Marco and I thought about it for a very long time and I am sorry for Kevin but in the end I have a duty both to the team and the country.”

Hazard: I watch videos of Messi and Ronaldo for inspiration

Euro 2012: Del Bosque gambles by including Torres in Spain squad