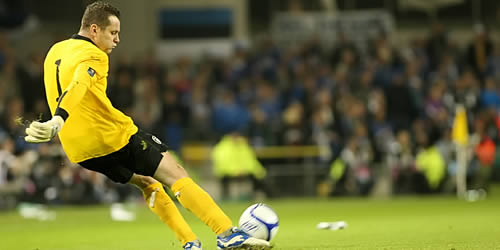 Shay Given has 121 caps for the Republic of Ireland Photo: Kelvin Gillmor

Shay Given is convinced the Republic of Ireland can cause an upset and beat Spain at Euro 2012.

Ireland will face Vicente del Bosque’s side on the 14 June after their opener against Croatia, and Spain are expected to finish top of Group C, which also includes 2006 World Cup winners Italy.

Fabio Capello’s penultimate game in charge of England saw the 65-year-old mastermind a surprise 1-0 win over Spain, with Frank Lampard scoring a second-half winner in a resolute display at Wembley.

Given, who was part of the Ireland side beaten by Spain on penalties in the second round of the 2002 World Cup, insists England’s win shows the European championship holders can be beaten.

“We know how good Spain are on their day, they can rip you apart with the players they have,” Given said.

“But we also saw last year when they played England at Wembley, England had a really rigid system and they won 1-0.

“Maybe against the run of play England grabbed a goal, but Spain can be beaten, and you can get a result against them.

“I’m sure we’ll look at footage of that game and see where England stopped Spain from playing.”

Ireland begin their first international tournament in a decade against Slaven Bilić’s side on 10 June and the Aston Villa goalkeeper believes beating Croatia would provide a timely boost ahead of their showdown with Spain.

“We start with Croatia obviously,” he added. “I know it’s a football cliche but we’ve got to take the first game and hopefully we can get a positive result from that. That will stand us in good stead to face Spain.”