Marianne Bevis previews the women's draw at the French Open, where Li Na is looking to defend her title 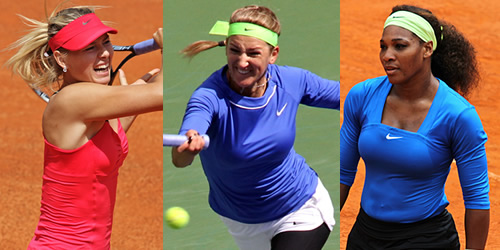 The rankings say it like it is. The more you win, the higher you go. Whether the points come from a few big tournaments or from lots of smaller ones, they determine the pecking order.

But the rankings can be a cruel mistress. Take what happened in the space of a fortnight on the men’s side. The Masters title in Madrid took Roger Federer to No2, ahead of Rafael Nadal: seven days later, with the Rome title going to Nadal, the positions were reversed.

In a stroke, the change banished the possibility of Nadal meeting Novak Djokovic in the semis and increased Federer’s chances of having to beat both Nadal and Djokovic to win the title.

The repercussions of the rankings have had an even more significant impact on the women’s draw, though.

The Russian headed into Roland Garros with two clay titles—first in Stuttgart against the Nos 1, 3 and 5 seeds, and last week in Rome against the reigning French Open champion, Li Na. She also reached the finals in Indian Wells, Miami and the Australian Open.

Defence of her Rome title took her to joint fourth place among active players for clay wins—jointly with Williams.

Although Williams withdrew from her semi-final in Rome with a lower back problem, she too has enjoyed an outstanding clay season. Her exit in Italy ended a 17-match winning streak that included titles in Charleston and Madrid.

To set up the prospect of a final between these rivals of eight years’ standing, they simply had to be drawn on opposite sides of the draw. They were not.

But the rankings have made things still more unkind. Had Williams risen to No4 rather than simply to No5 last week, she could not have met Sharapova before the semis. As it is, they have been drawn to meet in the quarters.

And the rankings have played one more cruel trick. Had the woman who began 2012 as No1, Caroline Wozniacki, not slipped from No8 to No9 last week, she could not have met Williams before the quarters. But fortune has thrown her into the very same eighth: They are scheduled to meet in the fourth round.

There is another player who must be cursing just how predictable the unpredictable draws can be. Agnieszka Radwanska has climbed month by month from No8 in January to a career-high No3, yet at every event in which both she and Victoria Azarenka have played this year, they have been drawn in the same half. And every time they have met—six times—Radwanska has lost, whether in semis or quarters. In Miami, where Azarenka was beaten before they could meet again, Radwanska went on to beat Sharapova for the title.

In Paris, it has happened again. The spectre of Azarenka looms on the semi-final horizon once more, though the Polish woman has more immediate problems to deal with.

Can she, or anyone else, prevent Azarenka claiming back-to-back Slams, or Sharapova winning her first French title to complete her career Slam, or halt the serene Williams’ progress to her 14th Major and a second French title a decade after her first?

All in all, the draw for Azarenka could have been far worse. For a start, the biggest threats, Sharapova and Williams, are in the other half. Then, of course, the highest seed in this half, Radwanska, has lost to the Belarusian in all six meetings this year.

Before that, her potential quarter-final opponent is No6, Sam Stosur. The Australian many be the reigning US Open champion, and may have reached the French final in 2010 but, if she gets past Nadia Petrova and Sabine Lisicki—and the former beat her at Indian Wells—Stosur will have to turn around a poor record against the No1. Not only has she lost all six previous meetings but she has won only 13 games in their last four matches.

Azarenaka opened the year in terrific style, winning four big titles on the trot—and her clay form has been none to shabby either, considering the dominance of Sharapova and Williams during this swing. It took defeat by each of those in the finals of Stuttgart and Madrid to stop Azarenka taking either title.

She withdrew from the last 16 in Rome with a shoulder problem, though it did not prevent her from defeating Shahar Peer for the loss of only three games. She also has a steady run-in to the fourth round: first the Italian veteran Alberta Brianti, then a French wild card, followed by No31 seed Jie Zheng, who has lost in the first round of Rome, Madrid and Brussels.

Interestingly, Azarenka could face the woman she was due to play in Rome’s second round, Dominka Cibulkova, in the fourth round. Also interesting is that the only other woman she has lost to this year could be her semi-final opponent if Radwanska falls early: Marion Bartoli.

Matches to watch out for: Lisicki v Mattek-Sands, Round 1; Cibulkova v King, Round 2; Lisicki v Stosur, Round 4.

Not only does Radwanska face the spectre of Azarenka in the semis, she has an unenviable draw in the early stages, too.

The second round holds Venus Williams, who beat Stosur last week to reach the Rome quarters. Next up could be the 2009 French winner Svetlana Kuznetsova and 2008 winner Ana Ivanovic in the fourth round: Both women cruised in their openers.

She also has two form players floating at the half-way stage. Sara Errani won her first 15 matches on clay—though won just a single game against Radwanska in Madrid. In the lower eighth, lead by Bartoli, is the fast rising Angelique Kerber, newly in the top-10, a semi-finalist in Rome—where she beat Petra Kvitova and Julia Goerges, and quarter-finalist in Madrid and Stuttgart, scoring wins over Venus Williams and Wozniacki. She also beat Bartoli in their only meeting this year.

The German is not fazed by the rarefied air she is now enjoying—she was a surprise semi-finalist at the US Open last year—and could, especially with a decent early draw, perhaps now be ready for the big time.

Matches to watch out for: Radwanska v V Williams, Round 2; Errani v Ivanovic, Round 3; Pennetta v Kerber, Round 3.

Na Li seems to have developed a knack for playing possum, only to come alive at just the right moment. She started 2011 with a run of 11 wins before losing in three-sets to Kim Clijsters in the Australian Open final. She then went five tournaments with just one win, only to crank up during the big clay events to reach the semis in Madrid and Rome in preparation for a first Grand Slam victory at Roland Garros.

Again things went quiet for the rest of the year but, come 2012, she has once more shown she should not be discounted when it comes to the big events. Clijsters was again her undoing in Melbourne, but this time Li put together four straight quarter-final finishes in Premiers and very nearly beat Sharapova in the finals in Rome.

So count out the defending champion in Paris at your peril. Nevertheless, before she can take up her allotted place in the quarters against Petra Kvitova, she has a tricky opener against Sorana Cirstea—who has wins over Bartoli and Jelena Jankovic on clay this year—and then the burgeoning talent of Mona Barthel, who beat Ivanovic and Bartoli in Stuttgart where she also came close to beating Azarenka.

Since finishing last year at No2, the often-brilliant Kvitova’s best result was the semis in Australia. Since then, she has been hit and miss—and hampered by a couple of niggling injuries. She has started to show some better form with the arrival of clay, but has never been beyond the last 16 in Paris. She doesn’t have a bad early run this year, though, probably meeting Jankovic or Schiavone in the fourth round. The latter is ‘doing a Li’, coming good to win her first title since the French Open in 2010 this weekend in Strasbourg. The competition was, though, not in the same league as Paris: She will do well to reach the quarters. As for Jankovic, she has lost in the first round of all four clay tournaments this year.

Matches to watch out for: Li v Cirstea, Round 1; Schiavone v Date-Krumm, Round 1; Zvonareva v Vinci, Round 3.

And so to the last quarter and, arguably, the most demanding and quality-packed section.

That Sharapova and Williams should face the prospect of a quarter-final meeting is fascinating enough—they have played 10 previous matches dating back eight years, and Williams has not lost to the Russian since 2004. But their routes to a potential 11th meeting are far from balanced.

Sharapova’s early rounds pose relatively few serious dangers, the first real test probably being another 25-year-old Russian Maria, Kirilenko. The No16 seed has beaten her taller opponent before, too, most recently at the 2010 Australian Open. They have only met once since, when Sharapova won in three sets in Indian Wells this year.

Williams, though, has no walkover in the opening match against Virginie Razzano, nor an easy third round against Goerges—though the German has scored few big wins this season. No, the big challenge comes in the fourth against Wozniacki.

The Dane may have slipped in the rankings this season, and hasn’t yet won a title: Her best result came with a loss in the final in Copenhagen to Kerber. However, she has beaten Williams, in the quarters of Miami, and won the first set against the American in Madrid.

Breathing problems forced her to retire in the first round of Rome, too, so she found herself outside the top eight and facing Williams in the fourth round in Paris.

Wozniacki also has the prospect of the talented Jarmilia Gajdosova in the second round and then the not inconsiderable power of Kaia Kanepi in the third.

So it’s a far from enviable route for the former No1 and hard to see her reversing her downward ranking trend in Paris.

If Williams makes it to the quarters, she and Sharapova could produce one of the most memorable matches of the year. The Russian’s grit and patience in beating Li in the Rome final backed up an important win over Azarenka in Stuttgart, have seen her lose only one clay match this season—to Williams in Madrid. However, Serena will have to be in perfect condition, with her back fully repaired, if she is to advance to the semis in Paris.

Matches to watch out for: Hampton v Rus, Round 1; Hradecka v Goerges, Round 1; Sharapova v Kirilenko, Round 4; Williams v Wozniacki, Round 4.