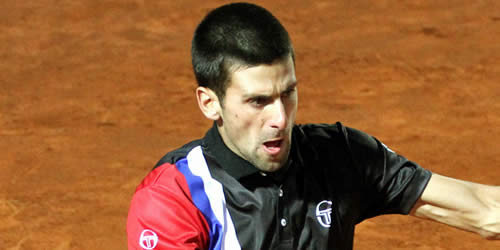 Novak Djokovic insists he is relishing the prospect of completing a career grand slam by winning the French Open for the first time.

The world No1, who stormed to the Australian Open title back in January after clinching three out of the four Majors last year, reached round two in Paris on Monday after battling past 7-6 6-3 6-1 Potito Starace of Italy.

But the Serb says he feels under no extra pressure to secure the only remaining grand slam title to have evaded him thus far.

“It doesn’t give me an extra negative pressure. I really think it’s a challenge and something to embrace and to enjoy,” said Djokovic.

“As I said, I’ll try to go step by step. It’s really too early to talk about eventually getting my hands on the trophy, but it’s definitely a goal.

“Pressure is always present. And the way I look at it, it is a privilege and, you know, it’s a challenge. If you feel pressure, that means that you’re doing something that is right.”

Djokovic will face Slovakia’s Blaz Kavcic, who beat Lleyton Hewitt on Monday, for a place in the third round in Paris.