On Tuesday in Paris, two women took to court for what, on paper, looked like a straight-forward finale to the first round 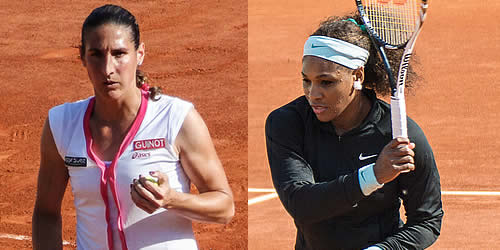 A year ago, the two women who were about to bring down the curtain on a hot and tranquil day at Roland Garros were both in very dark places.

Virginie Razzano lost her fiance and coach Stephane Vidal to a brain tumour just before the start of 2011’s French Open, but she decided she should play in his honour. She lost the first match but won many admirers.

Serena Williams was nearing a full year away from tennis, initially due to a badly cut foot that she sustained after winning Wimbledon in 2010 but subsequently to a life-threatening pulmonary embolism. She could not play Roland Garros at all.

Yet on this first Tuesday in Paris 2012, the same two women, who both played their first French Open 13 years before in 1999, took to court for what, on paper, looked like a straight-forward finale to the first round.

For while both had overcome adversary a year ago to make this appointment, all the expectations weighed heavily on one side.

Not only did Williams bring with her more Grand Slams than any other active player—13—she came to Paris in such great form that she was many people’s first choice for this year’s title.

Although she withdrew from the semi-finals in Rome with a back problem, she had built up a 17-match winning streak that included titles on the clay of Charleston and Madrid.

By Paris, she was on a 27-2 win-loss run and, considering she came into 2012 having played no tennis since she lost in the final of the 2011 US Open, it was an impressive return to the tour. It saw Williams, the French Open champion a decade ago and three times a semi-finalist since, start this year’s Paris campaign as No5 seed.

So weighing their achievements in the balance, Razzano must have cursed her ill fortune to find Williams as her first opponent.

For Razzano, ranked 111, this was her 14th straight French Open and her best result was a fourth round in 2009. That was the year she hit her highest ranking of 16 before injury—an on-going strand in the long career of the Frenchwoman—brought a premature end to her season.

2010 was even worse, as she pulled out of event after event with foot and ankle injury and then hip problems. And although she managed to break back into the top 100 in 2011, she still contended with thigh and shoulder problems. And even this year, Razzano had not been immune, pulling out of Barcelona with a hip injury.

But putting aside injury and illness, good and bad fortune, the starkness of the Frenchwoman’s task was written in the statistics.

After all their years on the tour, all their matches played—and the American had played just 40 more than Razzano’s 590—there remained a gaping chasm when it came to titles. Williams had 41, almost a third of them Majors, while Razzano had two. She won them, back to back, in 2007, in Guangzhou and Tokyo.

But what began as an intriguing match-up between two contrasting but resilient women turned into the kind of drama that may only be possible in the one-to-one gladiatorial setting of tennis.

For this is at once the most lonely of sports—no team support, no coach, nowhere to hide—and the most exposed—with every mistake, every action, every sound picked up by the surrounding thousands. There is no time limit and no winning line. No lead is enough, no momentum great enough—and no reputation too impregnable—until the winning point is played.

There were ups and downs in the first set, a break one way, a break the other, but Williams had the calm, focused demeanour that, from the experience of 46 previous Grand Slams, assured everyone she had no intention of losing.

She took the set 6-4, but there was still, by Williams’s standards, some improvement needed. Her first serve was only striking home at 55 percent, her errors outweighed her winners 17 to 11 and she let break points come and go. Fortunately for her, Razzano did little better.

It was in the second set that things began to take on more drama. The Frenchwoman had an eagle-eyed look and, despite twinges in her thigh, edged her serving level above Williams’s, stayed with her in both errors and winners, and neither woman faced a break point. There was also an edginess—the occasional squeal from Razzano before returning to the fray with apparently renewed vigour, countered by the cool stare of Williams as she tried to fathom her way through her difficulty.

Come the tie break, it looked as though the physical and mental strength of Williams would save the day. She opened a 5-1 lead only to find herself replaying a point she had already won—the ball from which she struck a backhand winner down the line was wrongly called out.

The dramatis personae acquired a third woman. The chair umpire Eva Asderaki had crossed swords with Williams in spectacular fashion in the final of the US Open when she docked the American a hindrance point for roaring on a cross-court winner mid-rally.

Asderaki had already played her part, warning Razzano for her squeals and eventually docking the Frenchwoman a point in the third set. On this particular point in the tie-break, there was no argument but nevertheless a clear shift in momentum. Williams seemed to lose her rhythm, her focus and her touch. Razzano won six straight points and took the 77-minute set—and she was not done.

Now a chorus joined the list of players. The French crowds, thrilling to such a comeback by their cramping, grimacing, lunging heroine, lifted her for the final act.

The first weapon to respond was her serve, which rose to over 70 percent. Her forehand time and again drove Williams too wide to retrieve with any venom. Her tactics manipulated her opponent first to one side and then the other, drawing error after error. Before the supporting crowd could believe it, Razzano was 5-0 up, seemingly unfazed by Asderaki, nor by Williams’ slight but persistent shakes of the head, nor by her own sore legs.

Williams, though, had no intention of letting the curtain fall on this drama just yet. She pounded the ball for all she was worth, skidding into hair-raising splits to retrieve shots and wielding her double-fisted backhand like a broadsword. The gap closed to 5-3 and Williams then set about breaking her opponent once more.

In their efforts to overcome their adversary, Williams and Razzano both hit the ball long, skewed it wide, found the net and sometimes found outright winners.

Twenty-five minutes it took, 12 deuces, five break points to Williams and eight match point chances to Razzano before the last of 47 unforced errors from the former champion went long and the final point of the final game was won. The match, against all odds, went to France.

Williams had fought back tears after the second set, but now she looked shell-shocked, confused even, that she could have let such a match slip, should have played so many errors, should have fallen in the first round of a Slam for the first time.

She packed her bags and left the Frenchwoman and her ecstatic fans to revel in the moment. By the time she faced the press, she had regained some composure but was no less baffled:

“I don’t know how many errors I ended up making but I haven’t been playing like that in the past. You know, that’s it. That’s life.”

But shocked as Roland Garros and those observers from farther afield may have been, Williams seemed to have acquired a new perspective from her absence—or rather the reason for her absence—last year:

“It is disappointing, but it’s life…I haven’t had the easiest past six months [but] nothing I can’t deal with. I’ve been through so much in my life and I’m not happy, by no means: I just always think things can be worse.”

Razzano, at the opposite end of the emotional scale, also used the moment to reflect on those darker days a year ago.

“Honestly, the past is the past. I think now I did my mourning. I feel good today. It took time. [After help from a friend] I felt I was ready to go ahead and live my life, professionally and personally. So is it destiny? Is it fate? I don’t know…I just wanted to win that match.”

In a footnote to this most dramatic and emotional of matches came the sister of one of the protagonists. It was Venus Williams who Razzano beat for her biggest title back in Tokyo in 2007 and Williams followed her sister out of Roland Garros for the loss of just five games, victim to a woman eight years her junior, Agnieszka Radwanska.

Venus, too, had overcome much to play her 15th French Open. This was just her fifth tournament since contracting the debilitating Sjögren’s Syndrome last summer and, as she approaches her 32nd birthday, she may look back at the one final she reached at Roland Garros with a tired smile. It was 2002, and her conqueror was sister Serena.