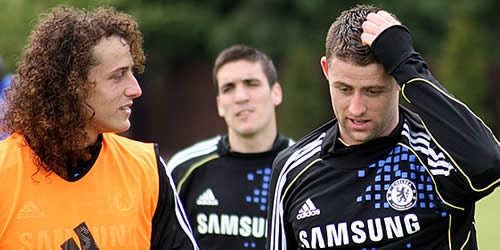 David Luiz and Gary Cahill both returned to training on Tuesday Photo: The Sport Review

Gary Cahill and David Luiz have handed Chelsea a timely boost by returning to training on Tuesday ahead of the Champions League final.

The pair have both been absent with hamstring injuries but were put through their paces with the rest of Roberto Di Matteo’s first team at Chelsea’s Cobham training ground.

Cahill, who suffered his injury in the second leg of the Champions League semi-final clash at Barcelona, insists he has no concerns over his fitness levels should he be thrown straight back into the starting line-up on Saturday against Bayern Munich.

“I’ve always had the goal to be fit for this game and thankfully it’s healed quickly,” said Cahill. “The work’s paid off and I was back today. Hopefully I’ll get some more training under my belt this week.

“I’ve missed games but I don’t think at this stage of the season you’re going to lose too much fitness. It’s not like I’ve been out for months so it shouldn’t matter too much.

“Plus, I’ve got three more days to train and if I need to do a little bit after training I can do that.”

Luiz, who has been missing since 15 April, could not hide his delight at returning to training and the prospect of featuring in Saturday’s showpiece.

“I’m so happy to return to training and now I can help Chelsea in this final,” he said.

Cahill reflects on ‘crazy’ season after swapping Bolton for Chelsea