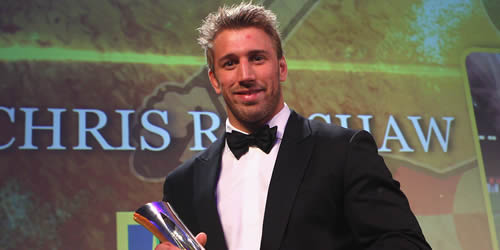 England and Harlequins skipper Chris Robshaw has capped off a remarkable season by being named Premiership player of the year.

Despite his England commitments Robshaw made an impressive 16 appearances for Quins this season, leading them to a top of the table finish ahead of this Saturday’s home semi-final against Northampton.

And on the international scene Robshaw has been equally imposing, leading a new-look England to second in this year’s Six Nations.

“This award is richly deserved,” said Harlequins director of rugby Conor O’Shea, who first bestowed the captaincy honours on Robshaw.

“What I like about him is that no matter which accolades come his way or what he achieves we all know what comes first with Chris is the team.

“Chris is the sort of guy who’ll never get above himself. For him it is all about the team. He wants nothing more than for the team to be successful.”

It was also a good night for England’s Owen Farrell who took home the award for best Premiership player aged 21 or under.

The Saracens star has been a revelation for club and country over the past 12 months and will look to defend his side’s Premiership crown in their semi-final against Leicester at Welford Road.

Who will be England’s No6 for West Indies Test?

Wales’ Sam Warburton will be fit for summer tour to Australia