Dirk Nannes column: In defence of the Indian Premier League 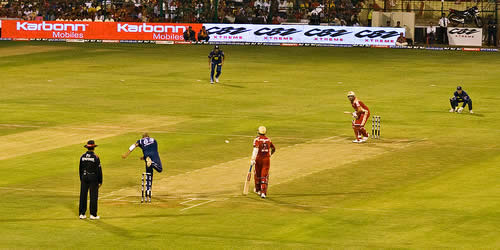 The IPL is a melting pot of the world’s cricketing cultures Photo: SandFlash, via Flickr

The IPL is such a unique tournament on the world cricketing calendar for so many reasons.

Within India it is huge, but outside of India – especially in the UK – it seems to have as many detractors as supporters.

Many see it as a toxin, eating away at the fabric of world cricket, while others see it as a force for good, promoting attractive and aggressive cricket across all forms of the game.

One of the unique aspects of the IPL is how each team becomes a melting pot of the world’s cricketing cultures, characters and tactics. Take my dressing room at Royal Challengers Bangalore as an example. We have a fusion of Australian, West Indian, Sri Lankan, South African, New Zealand and Indian players. Before IPL, this sort of mix could only occur in infrequent one-off World XI games.

Mixed with the laidback Chris Gayle, who sleeps 16 hours a day, we have the hard working, up-and-coming Indian superstar Virat Kohli, who doesn’t sleep at all. Some could see this as a source of conflict, but in the world of IPL nothing could be further from the truth.

The IPL is a tournament that brings much of the world’s cricketing talent together in a six-week burst of cricket collaboration. Players learn from each other, work out each other’s tricks on how to play certain bowlers, or how to bowl to different batsmen.

We discuss field placements, ways to bowl and bat, and watch the way each other train. It’s an extraordinary array of talent and differing opinions in the changing room, and on display at the grounds.

But whilst the IPL can help to develop a cricketer by opening them up to new experiences, it still remains a source of conflict. As long as there remains no IPL window in the international calendar, it will continue to create a divide between players and their boards.

Look at West Indies and Kolkata Knight Riders spinner Sunil Narine as an example. A player of extraordinary talent, he took wickets for fun in this year’s IPL. But many would say he should instead have made his Test debut in the recent series against Australia, rather than take the cash on offer in the IPL.

On the one hand, there’s the US$700,000 contract with his IPL franchise. On the other, a Test debut for the West Indies (for which he does not hold a contract) and a payment of a few thousand dollars. If he chose the Test route, the IPL rules mean he’d lose $315,000 of his contract.

Do you take the $700,000, secure your future, and simply postpone what appears to be an inevitable debut for an extra few months? It’s a huge decision for a man who is yet to turn 24. Can you hold his desire for financial security against him? Idealists do, but I, and most players in the IPL, certainly don’t.

The IPL poses many questions to world cricket: some good, some bad, some inconvenient, and some that many boards don’t want to hear. The sooner we can embrace its concept and its indelible mark on the game, the sooner we can settle the internal conflict that blights its participants.

Before the IPL, who knew that Murali was the fun-loving joker, Zaheer Kahn the sophisticated wine aficionado, and Virat Kohli the ultra-competitive, motivated and responsible cricketer?

Whilst it will always have its detractors, those critics cannot deny that the IPL has allowed world cricketers to mix ideas, discuss tactics, and get to know each other on a scale unimaginable before it came into existence. I firmly believe the world of cricket is healthier as a result.