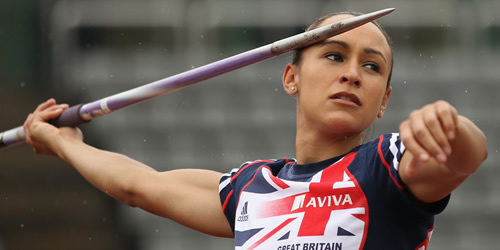 Jessica Ennis finally erased Denise Lewis from the British record books in Gotzis – now she’s determined to follow in her footsteps and become an Olympic champion too.

For the third year in a row, Ennis was the class act at the Hypo multi-events meeting in Austria.

And there was no repeat of the second day horror show that cost her the defence of her world title in Daegu last summer.

She equalled her personal best in the long jump with a best leap of 6.51 metres and then improved her previous record in the javelin by 40 centimetres, with a throw of 47.11m.

Coming into the final event, the 800m, her victory was all but assured – Russian world champion Tatyana Chernova was 132 points behind in second – but setting the record remained too close to call.

“I always knew I was capable of getting the record because I was so close in Barcelona two years ago,” she said.

“It just had to come together and thankfully it did here. I didn’t feel too much pressure about it but it was something that I wanted and I’m really happy.”

However, it appears unlikely that Great Britain will feature in the decathlon at the London 2012 Olympics.

Ashley Bryant fell 113 points short of the Olympic B standard but still recorded a personal best of 7837 to finish in 12th place.

Elsewhere, Phillips Idowu set a season’s best and new meeting record with a 17.31m leap to win the men’s triple jump at the Fanny Blankers-Koen Games in Hengelo.

Andrew Pozzi continued his red-hot recent form with a 13.39 sec time as he finished second over 110m hurdles while Anyika Onuora ran just two hundredths outside the A standard for the 200m when she clocked a season’s best 23.12 secs.

Ross Murray produced a big personal best, recording a 3:34.76 A standard in the 1500m as he finished ninth but Mark Lewis Francis was well off the pace in the 100m – placing sixth in the final in a pedestrian 10.39 secs.

Meanwhile, track legend Haile Gebrselassie’s hopes of competing at London 2012 in the 10,000m appear over after he came home a distant seventh – with five Ethiopian team-mates ahead of him.