With Warwickshire sitting pretty at the top of the County Championship table, Keith Barker spoke to Chris Airey 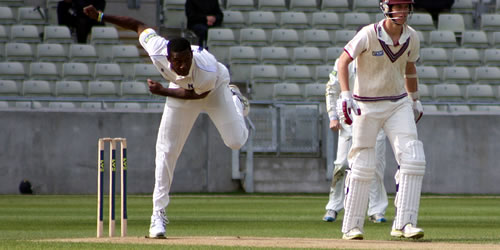 Warwickshire all-rounder Keith Barker is confident Warwickshire can go one better than last season – when they were pipped to the County Championship by Lancashire – and lift the title for the first time since 2004.

The Bears have made a strong start to the campaign, winning two and drawing one of their first three Championship fixtures, and Barker has played a key role in their success, revelling in his new role as an opening bowler by taking three wickets in a nail-biting win over Somerset before claiming his maiden first-class five-wicket haul against Lancashire in a five-wicket victory at Liverpool.

A second five-fer swiftly followed against Durham and the left-armer says he and the team are full of confidence. “Obviously bar the injuries [to Chris Woakes and Boyd Rankin], the season so far couldn’t have gone better. It has been a great start.

“We have been in situations when we didn’t know how the result would go, it has been a bit close at times, but we managed to dig deep and get the results we needed. Last year we could have done with fighting it out a bit more but if it keeps going like this then I think we can have a very good season.

“We are always seen as underdogs but we don’t really mind that as the limelight is off us. We just go about our business and hopefully creep by without anyone seeing us. As long as we concentrate on our game and what we are good at, then I don’t see any reason why we can’t be up there again at the end of the season.”

Barker admits he didn’t expect to feature in the opening fixtures but has been given the opportunity to open the attack after Woakes suffered an ankle injury while on pre-season tour in the Caribbean and Rankin suffered a stress fracture to his foot. With the duo set to return soon Barker realises he faces a battle to keep his place, despite his excellent start to the season. “All I can do is just keep doing what I am doing and see what happens. I wasn’t really sure that I would get into the team at the start of the season.

“We have such a good bowling attack. I was wondering if I would get the opportunity and if not I was just going to see what happens, unfortunately for Woakes he went down and Boyd as well and that meant that I could come in and play and I am just trying to make the most of this opportunity. They are obviously big performers in our team, it is just one those things where you expect them to come straight back in.

“It is all down to what Ashley Giles and Jim Troughton think at the end of the day. Obviously wickets will have an effect on that, but it is just nice to be in a bowling unit where we can actually give bowlers a rest and we know the bowlers who come in will do well.”

Barker, who played professional football for Blackburn Rovers before pursuing a career in cricket, is full of praise for bowling coach Graeme Welch and says the former Warwickshire seamer has been instrumental in his development. “We started working on my action in November and we literally broke it down, just using my arms not even actually bowling, just getting my arms working as one instead of individually.

“I now feel a lot better and a lot more confident. I have to thank Graeme 100 per cent really, he is the one who helped me out with my action and helped me understand a lot about my bowling, and so my thanks go out to Graeme.”

Whether Barker retains his place when Woakes and Rankin return to fitness remains to be seen, but the 25-year-old has certainly given director of cricket Ashley Giles plenty of food for thought as he attempts to plot the Edgbaston club’s path to silverware.