Leinster 42 Ulster 14: We want to create a dynasty – O’Driscoll 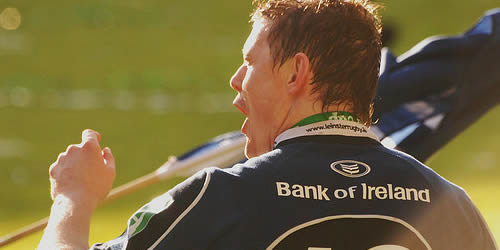 Brian O’Driscoll hailed Leinster’s “phenomenal” effort after the province won their third Heineken Cup crown with a 42-14 victory over Ulster at Twickenham on Saturday.

O’Driscoll, who played a key role in the first all-Irish final, believes Leinster have the chance to create a dynasty and insisted his team-mates want more success.

“The energy from all 23 was phenomenal, it shows where we are as a squad. I only came in for the knockout stages – for the most part – but the hard graft was put in during the group stages,” the Ireland captain told Sky Sports.

“After we won the first we talked about not being content with that.

“We’re now trying to create some kind of dynasty and something to be remembered. We’re going in the right direction towards doing that. I know this team, they’ll be hungry for more.”

First-half tries from man of the match Seán O’Brien and Cian Healy helped the metropolitans to a 14-6 half-time lead, with both Ulster scores coming form the boot of Ruan Pienaar.

Shortly after the interval, Welsh referee Nigel Owens awarded the men in blue a penalty-try as Ulster brought down a Leinster maul.

Brian McLaughlin’s side finally succeeded in crossing the try-line in the 60th minute, when Dan Tuohy touched down – but Pienaar missed his conversation to leave the Ulstermen trailing 24-14.

It was the northerners’ final act of resistance as Leinster took control, with tries from Heinke van der Merwe and Sean Cronin culminating in the highest winning score in Heineken Cup final history.

Ulster’s coach, McLaughlin, in charge of his final game as the province’s coach, spoke of his disappointment at the two first-half turnovers that lead to the concession of tries.

“The two tries were extremely disappointing,” McLaughlin told BBC Sport. “We fought back but Leinster showed what a quality side they are.”

Whilst acknowledging that Leinster were deserved winners, he insisted despite the heavy defeat, he did not regret his tactics or team selection.

“I wouldn’t do anything differently at all. We knew it was always going to be difficult,” he added.

“We came here with great hope. We knew we were up against a quality side and that we had to take every chance that was going.”

Schmidt’s side join Leicester Tigers as the only teams to have won consecutive titles in Europe’s premier club competition.

Leinster can cap a great season with further success against Ospreys in the RaboDirect Pro 12 Final next weekend.