Liverpool would be taking ‘big gamble’ by appointing Rodgers 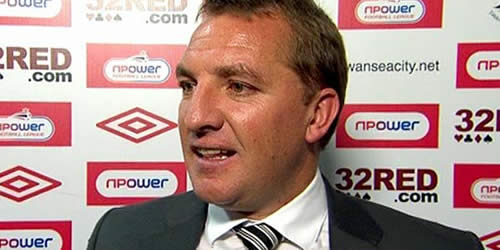 Brendan Rodgers is poised to take the reigns at Anfield

Mark Lawrenson believes Liverpool would be taking a big gamble by appointing Brendan Rodgers as Kenny Dalglish’s successor at Anfield.

The 39-year-old led Swansea City to 11th place in the Premier League on their return to the English top flight, including a 1-0 victory over Liverpool at the Liberty Stadium on the final day of the season.

Dalglish was sacked by the Reds over a fortnight ago after he led them to a disappointing eighth-place finish, and the club’s owners Fenway Sports Group have reportedly offered Rodgers a three-year deal.

Lawrenson, who won the European Cup with Liverpool in 1984, admits Rodgers would face a difficult task in turning the club’s fortunes around – but urged the Reds’ supporters to get behind the Northern Irishman should he take the reigns at Anfield.

“It’s a great appointment for him and the biggest gamble the club have taken in a long time,” Lawrenson told BBC Sport.

“Liverpool supporters will give him a chance. They will give him time. But if they don’t look like finishing anywhere near top four, what do the owners do?”

“Rodgers has done a great job at Swansea, everyone loves the way they play their football.

“The chance for Brendan to manage a club which is in the top 10 in the country was too much to resist. It’s a different challenge for him, the club will be expected to win every game.

“Liverpool spent an awful lot of money last season, there’s no doubt they overspent. It’s a big job for Rodgers because he’ll be responsible for everything as there’s no director of football.