Alison Williamson, a bronze medallist in Athens, will compete at her sixth Games at London 2012 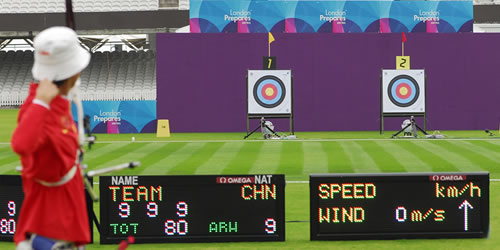 Alison Williamson will join an elite club of British Olympians this summer after securing selection for her sixth consecutive Games.

Williamson, 41, was sweating on her selection after failing to place in the top two at the national archery selection trials but her experience, which includes an individual bronze medal in Athens, edged out Beijing team-mate Charlotte Burgess.

Four years ago Williamson finished an agonising fourth in the team event and is reunited with two-time Olympian Naomi Folkard and Games newcomer Amy Oliver to put that right in London.

“I’m so thrilled and proud to have made it to my sixth Olympics,” said Williamson.

“It makes all the sacrifices, and all the hard work, over many years, worthwhile. Now I can start to look forward to the enormous honour of representing my country at a home Olympic Games. It just doesn’t get any better.

“I have enjoyed the experience at every Games and it means as much today as it did when I qualified for the Barcelona Games 20 years ago. This is the ultimate event that every athlete aspires to, and to be there six times is just amazing.

“The Olympic selection process was a tense three weeks, and the competition was fierce, as you’d expect, and I was so relieved to secure one of the three places.

“I am confident Amy, Naomi and I will be competitive in both the individual tournament, and also in the team event. The three of us won a silver medal at the Commonwealth Games in Delhi in 2010, and there’s no reason why we can’t be in the mix for a medal at Lord’s.”

Alan Wills has been named as the third member of the men’s team after Simon Terry and Larry Godfrey took the top positions at the national trials.

It means an unchanged men’s team from Beijing with Terry, a double bronze medallist at the 1992 Olympics, contesting his third Games.

“I’m not turning up for the experience, I’m turning up to do my very best, in both the individual competition, and with Larry and Alan in the team event,” said Terry.

“I won two bronze medals at the Barcelona Games 20 years ago, and that great experience is one I’d love to repeat.

“As a team, Larry, Alan and myself have medalled at World Cup tournaments, and at a World Championship, so I see no reason why we can’t be in there with a good shout at the London Olympics.”

With five of the selected squad Olympic veterans, archery team leaders are expressing confidence in their hopes for the Games, with the sport being staged at the iconic Lord’s Cricket Ground.

“We have an extremely experienced squad who have had to work very hard to fight off determined competition for a place at the Games. It’s a great achievement by all six archers to maintain such high levels of consistency over a long time,” said Archery GB performance director Sara Symington.

“But securing their place is just the start, and now we all – archers and coaches – have to be extremely focused, to make sure that when they step out at Lord’s they are as prepared, ready and focused as they could possibly be.”

The selection of five archers, in addition to three sailors earlier today, takes Team GB to 87, with just under 500 athletes still to be confirmed across all 26 Olympic sports in the coming weeks.

“There is a real wealth of experience within the squad, which will stand them in good stead for the unique pressure involved in Olympic competition,” said Team GB chef de mission Andy Hunt.

“All six individuals have won medals at world level and the men’s team demonstrated just last weekend that the British archers are competitive with the very best by winning gold at the World Cup in Turkey.”