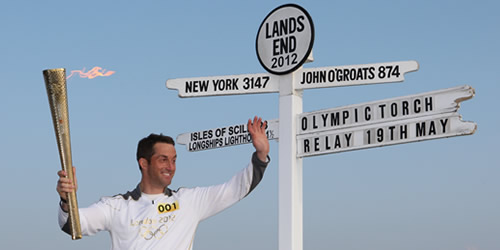 Ben Ainslie wore 001 to represent he is the first of 8,000 runners Photo: Locog

Ben Ainslie, who will be seeking a fourth consecutive gold medal this summer after winning a record sixth world title on Friday, learned to sail on the waters around Land’s End, the UK’s most south-westerly point.

And there was no more fitting choice for the lead-off leg – a genuine local hero.

Nearly 8,000 will follow him as the torch visits villages, towns and cities across the United Kingdom, coming within ten miles travelling distance of 95 per cent of the population.

Although who runs the anchor leg, and ignites the cauldron at the opening ceremony on July 27, remains much-debated.

A Royal Navy rescue helicopter brought the flame, safely enclosed in a lantern, to Land’s End.

It was a perfect Cornish morning, chilly but with bright blue skies, and thousands arrived to be part of the simple celebration, the crowds five deep in places.

“It’s a fantastic moment for the whole nation and it’s finally all started off,” said Ainslie, who wore number 001 and largely walked his leg, allowing many of the crowd to touch his prized torch.

“I was surprised by how emotional the moment was and how nervous I was. I’m just very proud for everyone involved and relieved I didn’t do anything wrong.

“It’s also a proud moment for Cornwall and it means so much to the people here to start the relay.”

Ainslie and every torchbearer will run surrounded by a security team of Metropolitan Police officers, who are determined to prevent any protesters hijacking the relay to publicise their cause.

In Beijing there was criticism of the heavy handed tactics used by the torch’s security team, when the flame briefly visited London, but this time organisers are determined to employ a lighter touch.

However, one man strayed a little too close to a third torchbearer while appearing to take a photo and was immediately bundled to the side of the road.