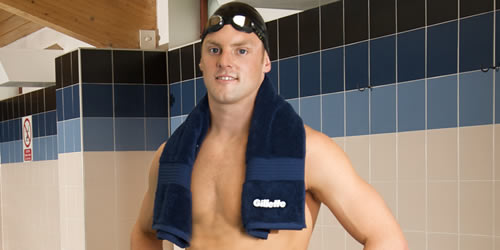 Much has been said and written about the benefit that a home Olympics can give an athlete – but for Liam Tancock, the devil is very much in the detail.

With less than a hundred days to go until Tancock – the world champion and world record holder over 50m backstroke – begins his quest for perfection, the frenzy surrounding his medal chances are increasing by the minute.

The 26-year-old got his first taste of that feverish atmosphere at the Olympic Aquatics Centre in March at the British trials where he sealed his qualification for the Games in the men’s 100m backstroke.

But for Tancock, whose preferred event the 50m is not featured in this year’s games, it is the little things that will make all the difference when he takes to the starting blocks this summer.

“We have just had our first training camp with the British team of swimmers who have qualified for the games and we got to spend a concentrated amount of time at the Olympic pool,” said Tancock, who is an ambassador for Gillette’s ‘Great Starts’ campaign.

“I can’t say enough about what a huge benefit that is, to get the chance to be in and around the Olympic pool could make all the difference.

“The fact that the whole crowd will be screaming for us is obviously a huge boost and will get the adrenalin pumping like never before when you’re walking out for your race.

“But it’s the little things that you get from knowing your surroundings that are just as important in an event like mine where every tenth or even hundredth of a second is crucial.

“Just knowing things like how long it takes to get from the warm-up area to the pool, where the physios are going to be or even something as mundane as where the nearest toilets are could be massive.”

That same attention to detail is a key part of Tancock’s training schedule that is designed to have him peaking at just the right time come this summer.

Gillette’s ‘Great Start’ campaign celebrates coaches and inspires the next generation by encouraging men to get into coaching and Tancock admits he admits he has been fortunate to work with some of the best in the world in his rise from talented junior to world champion.

“My current coach Ben Titley has been a big reason behind my success,” he added. “I’m very much a believer that great coaches make great sportsmen.

“As a youngster I worked with Dave Randall and now with Ben as well these are guys who inspire me and have helped me understand that every little helps to get myself in the best position come the big events.

“My strategy with Ben focuses entirely on myself and being the best that I can be, my goal going into London is to swim a personal best.

“That’s all I can control and if my best is good enough for a medal well that’s the best bonus you can get really isn’t it?”

Gillette is offering to fund coaching qualifications for men across the UK as part of the ‘Great Starts’ campaign. To apply for a coaching grant visit facebook.com/GilletteUK

Stuart Lancaster issues warning on England discipline ahead of tour