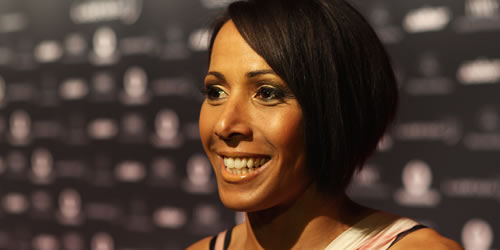 Dame Kelly Holmes, winner of two gold medals at the Athens Olympics in 2004, has highlighted swimmer Rebecca Adlington and cyclist Chris Hoy as great British contenders for golden glory in London this summer.

Talking at the London-based Laureus this week, the Team GB Ambassador was equally excited by the prospects of “brand new people that even I would probably never have thought would step up to the plate.”

For the woman who had her home nation cheering in unison when she crossed the line to win her second Athens gold is just as enthused by the special opportunities that this unique event throws up: “The great thing about the Olympic Games is that new stars are born, people who are not in the public eye right now.”

In 2008, it was Usain Bolt’s three golds and three Olympic records that set the sporting world alight, but Holmes believes such achievements have an impact wider than individual glory: “What’s brilliant about having somebody so great in sport is it brings everyone else on…the performances rise to a whole new level and that’s what sport is about. Records are there to be broken.”

So although Bolt, she believes, is again the man to beat in the 100m—“I think he’ll blow the field away”—she also thinks that the 200m is a closer call: “He’s definitely got to watch out because Jamaica are full of amazing talent and Johan Blake has run the second fastest time in the world. I think, on his day, he could give Bolt a run for his money.”

Similarly, Holmes’s own achievements have inspired others not simply because of their record-setting status—she is the only athlete ever to reach the 800m and 1,500m Olympic finals three times, is one of only three women to do the Olympic double and, at 34, was the oldest woman in the field in Athens.

For Holmes suffered many near misses in her career. She was squeezed out of the medals in the 800m at the 1996 Atlanta Olympics after suffering a stress fracture, and injury also ruined her bid for the 1997 World Championships 1,500m. She won bronze in the 800m in the Sydney Olympics and silver in the 2003 World Championships, but it seemed that gold would always elude her.

“I could have given up. I had depression, everything. But I felt in my heart one day it might happen.”

Holmes went on to reveal something of what lies behind such determination and what makes her now want to inspire the next generation.

“I’ve always been a person that’s wanted to fight to better themselves. You know I was just a council kid, a council girl. As a family we didn’t have a lot of money so I think from a very early age I always strove to do something slightly better, if it was washing windows or cleaning cars…because I didn’t want to rely on my family who were working hard to put food on the table.

“I was not very academic at school, in fact I have no real exams to talk of…and so those things almost put you lower than anybody else in class. But then when I was in sport…it gave you that level playing field and made you feel good about yourself.

“There’s so many people that have talent in sport, but if they do not fulfil it because they have not got the real heart and determination and commitment and drive to be successful, they lose that talent. You know there’s a Japanese proverb that says: ‘Get knocked down seven times, stand up eight’. And in seven years I had injury problems and for me they were really big knocks even though I won medals. But on the eighth year, I won my two gold medals, so it came true for me.”

It’s a message she is passionate about passing on. A former winner of the Laureus Sportswoman of the Year Award, she is now a Laureus Ambassador: “Having worked with Laureus over the years I know they are all about inspiring young people through the power of sport to fulfil their ambitions…and I think that’s what the Games brings as a whole.”

“Because of that, I wanted to do my own work so I have the Dame Kelly Holmes Legacy Trust…We’ve been helping LOCOG and BP to run the Young Leaders Programme over the last two years, which is a personal development programme to help young people aspire to be something in their own lives, and they get a role at the Olympic Games as a volunteer, so that is great.”

And if all that is not enough to inspire, her memory of winning gold back in Athens surely will be:

“Athens in 2004 obviously for me was the pinnacle of my sporting career. I achieved my dream finally after 20 years. Athens changed my life….everything that I’d ever worked for became worthwhile, every kind of moment that I pushed my body to the extreme, every tear that I cried, you know it was all worth it after I won my medals.”

To see more of Holmes’s interview, visit the Laureus website.