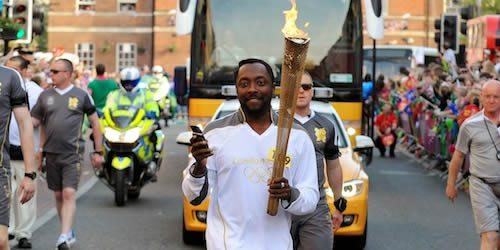 London 2012 organisers have confirmed the flame briefly went out during Monday’s third leg of the Olympic torch relay.

The torch was being carried through Torrington in Devon by wheelchair badminton player David Follett when the flame flickered and died due to a burner malfunction.

After a brief delay, a replacement torch was brought from the relay convoy and ignited from one of the mother flames, which are carried at all times in a safety lantern used for such eventualtiies.

Olympic champion and senior organising committee official Jonathan Edwards was among the 100 torchbearers on the third day of the relay but the real star turn was Black Eyed Peas front man Will.I.Am.

The United States-born music producer – currently working as a judge on the BBC One show The Voice – was a surprise addition to the line-up and delighted crowds as he ran through Taunton.

As he ran he was writing about his leg on the social networking site Twitter and he waved his phone in the air urging those on the roadside to join his three million followers.

Tuesday’s fourth leg of the relay takes the flame from Taunton to Bristol, with stops at Wells Cathedral and Royal Crescent in Bath.

Among the torchbearers are Olympians Amy Williams, who won Britain’s first individual Winter Olympic gold for 30 years two years ago in Vancouver, Jason Gardener, a gold medallist in the 4x100m at the 2004 Games, and Kate Allenby, who won modern pentathlon bronze in Sydney 12 years ago.