With 78 days to go before the opening ceremony, the Olympic torch has been ignited in Olympia, Greece 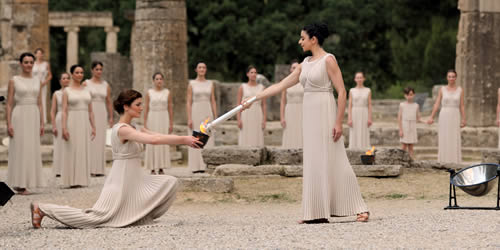 The torch for the London 2012 Olympics has been lit in a sombre ceremony laden with ancient symbolism.

With 78 days to go before the opening ceremony, the torch was ignited by the power of the sun rays at the 2,600 year old Temple of Hera, where victory wreaths were once presented during the ancient Games.

Greek actress Ino Menegaki, dressed in pleated white robes and playing the role of high priestess, raised her arms to the sky and invoked the sun God Apollo in prayer before kneeling to light the torch.

She used a conclave mirror to focus the sun’s rays onto a specially designed silver torch and immediately it blossomed into flame. They was no certainly requirement for the back-up flame, lit at yesterday’s rehearsal, with bright skies and scorching sunshine at the ancient site.

The ceremony began with the Olympic anthem and the hoisting of the Olympic, British and Greek flags and addresses from senior dignitaries.

“This flame will soon cast its glow around the entire world,” said Rogge, who presided over the lighting ceremony for the final time in his 12 year career as IOC president.

“The flame we kindle here is a powerful symbol of the tradition and values that underline our movement. It is a beacon of fellowship and peace.

“With this ceremony we begin the final countdown to the 2012 Games. The energy that passes from the sun to the Olympic flame will light a torch that travels from the birthplace of the Olympic Games to a country that invented modern sport and the spirit of fair play.

“As the torches travels the UK, the inspiring stories of the torchbearers will touch hearts and fire imaginations around the world.”

Coe follows Lord Burghley, who chaired the 1948 organising committee, as the second British athlete turned administrator to witness the torch lighting ceremony ahead of a London Games.

“This ceremony reminds us of our responsibility to inspire young people, who will be at the centre of our torch relay,” he said.

“We promise to protect the flame, cherish its traditions and stage an uplifting torch relay of which we can all be proud.

“I know the passing of the Olympic torch from hand to hand, torchbearer to torchbearer and generation to generation will touch and inspire the world.

“This is the second time representatives of the UK have gathered here to celebrate the lighting of the Olympic flame.

“In 1948, shortly after the Second World War, my predecessor stood where I am today and made the first tentative steps in turning the world from war to sport. We find ourselves in challenging times again and turn to sport once more to connect the world in a global celebration of achievement and inspiration.”

World champion open water swimmer Spyros Gianniotis, who was born in Liverpool, was the first torchbearer while promising boxer Alex Loukos, 19, who was part delegation of east London schoolchildren who travelled to the host city election five years ago, was second to carry the flame.

Carlos Nuzman, the head of the Rio 2016 organising committee, will also carry the flame on the first day of its journey.

“It’s an important day for me and my whole career,” said Gianniotis.

“It’s my last Olympics and I’m half English so it’s something unique for me, and I’m shaking now.

“I am trembling from the emotions. It is the highest honour for an athlete to do this.”

Loukos, whose father was born on the Greek island of Lesbos but was raised just a stone’s throw from London’s new Olympic Park, added: “I have grown up with London 2012.

“From helping with the bid in Singapore when I was 12, to witnessing the incredible regeneration of my home in east London as the 2012 Games have taken shape and changed the area forever, to now with this once-in-a-lifetime opportunity to be one of the first to carry the torch for the London Games.”

After the relay around Greece, the flame will be passed to London 2012 organisers next week at a ceremony at the Panathinaiko Stadium in central Athens.

It will then be taken by a golden liveried plane to Cornwall, where it will start its 70-day, 8,000 runner journey around the UK, with the flame coming within ten miles travelling distance of 95 per cent of the UK population.

The torch relay culminates on July 27 with the final leg from Hampton Court palace, the riverside former home of King Henry VIII on the outskirts of the capital, down the River Thames to the Olympic Stadium in east London.

London 2012 organisers will certainly be hoping their torch relay will not be dogged by the same problems encountered in the build-up to the Beijing Olympics, when activists disrupted several legs of the relay in protest at China’s human rights record. The progress of the Olympic flame ahead of the Vancouver Games in 2010 was also halted by anti-Games protesters.

In total, 52 Metropolitan Police officers will protect the Olympic torch on its journey around the UK, with fears it may be targeted by radicalised protest groups or lone protesters.

This protection squad will comprise five teams of seven officers running alongside and around the torch flame bearer to prevent a repeat of the chaotic scenes from four years ago.