Sir Chris Bonington carries the Olympic flame on the summit of Snowdon, the second highest peak in the sport, as relay continues 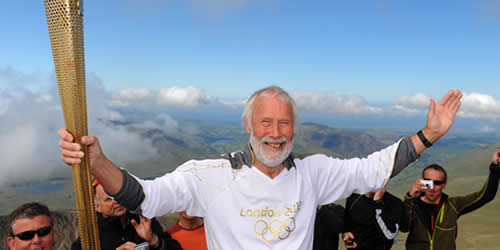 He has stood on the roof of the world, scaled the north face of the Eiger and conquered the most difficult peaks in the Himalayas.

But mountaineer Sir Chris Bonnington claimed that travelling the top of Snowdon on its famous mountain railway was right up there with his achievements.

The 77-year old mountaineer carried the Olympic flame to the second highest peak in the UK at the conclusion of its five-day journey around Wales.

It was the highlight of a thrill-seeking day for the torch, which also was carried on an RNLI Lifeboat and to the summit of Great Orme, a limestone headland on the north coast of Wales, by cable car.

“This was a very special moment for me and it totally exceeded all my expectations,” admitted Sir Chris.

“I think it’s not only the honour of carrying the Olympic flame to the top of Snowdon, but also the fact it’s part of a long journey for me which goes back to 1952 when I first started climbing here on Snowdon and spent New Year’s Eve in an empty cafe in the bitter cold.

“So this really is a lovely exercise of passage for me and it was lovely to share it with my fellow climbers and people who love the hills and to feel their warmth and approval.”

Three-time world gymnastics champion Beth Tweddle was also among the 125 torchbearers as the flame left Wales and arrived in Chester for an evening celebration, where Grand National winning jockey Jason Macguire ignited a special cauldron.

Wednesday will mark a special moment in the torch’s 70-day journey when it passes through Much Wenlock during a 133 mile stage from Chester to Stoke on Trent.

The Shropshire village was an inspiration to International Olympic Committee founder Pierre de Coubertin, who used the Wenlock Olympian Games, established nearly half a century before the modern Olympics, as the inspiration behind his event.

John Simpson, the vice president of the Wenlock Olympian Society, will be among the torchbearers and will pose beside the ‘Courbetin Oak’, which the Frenchman planted nearly 122 years ago.

Archery’s Alison Williamson, who later this year will become only the third British athlete to compete at six consecutive Olympic Games, will also carry the torch.