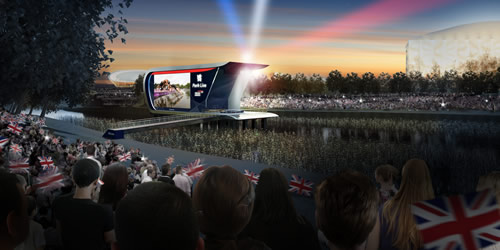 A computer-generated image of what the live site will look like Photo: Locog/Getty Images

Whether it will be Hoy Hill, Ennis Elevation or Bolt’s Bute is unclear but London 2012 organisers have revealed plans for a fan zone right in the heart of Olympic Park.

Previous Games have been criticised for the sterile atmosphere around their main cluster of venues, where only ticket holders have previously been allowed access.

But up to 10,000 spectators without Games tickets will able to enter Olympic Park this summer, where they can watch action unfold on a giant double sided screen, three times the size of a double decker bus.

Park Live, which is being backed by 2012 sponsor British Airways, will be set in the centre of the wetland bowl, within the newly created 250 acre parklands. It will be open from early morning to late evening for spectators to visit before and after sporting events on the Olympic Park.

“Whether it’s ‘Halsall Hill’, ‘Pistorious Park’ or ‘Dai Greene Fields’ our plans for Park Live will create a green and colourful place for fans to cheer their heroes and soak up the Olympic Park atmosphere,” said London 2012 chairman Seb Coe.

“With lush lawns surrounded by wildflower meadows and rustling reeds, a trip to Park Live will be a truly unforgettable experience.”