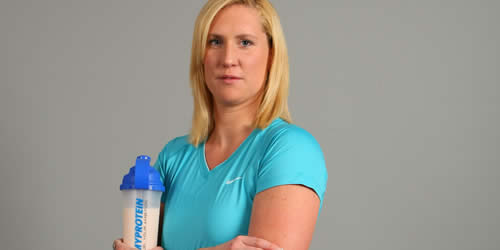 Gemma Spofforth is confident Team GB will deliver medals at London 2012 despite the intense pressure of performing at a home Olympics.

The 24-year-old, who set the a world record in the 100m backstroke on the way to gold at the World Aquatics Championships almost three years ago in Rome, says the prospect of support from the British public is spurring her colleagues on ahead of this summer’s showpiece.

Britain’s swimmers are expected to be one of the big success stories of the Games, with two-time Olympic champion Rebecca Adlington strongly fancied – and Spofforth is eagerly anticipating the support of an animated home crowd.

“The majority of us will be able to step up and perform because we know that the whole country is behind us and everyone in the stands is there to back us,” said Spofforth.

“We need the support to turn up and get behind us, and not just be British and stand there and say, ‘Oh Bravo’, ‘Good show’, or whatever it may be. We want them to stand up and be a bit like the Americans.”

Spofforth senses that there is genuine optimism amongst the British public when it comes to Team GB’s potential for success at the Games.

“This year especially, I have felt that Britain has got behind us, and is supporting us and wants us to do well,” she added.

“But going from past experiences, and other things that have happened, it felt like perhaps that the British public were waiting for us to fail, and waiting for the story that says, ‘so-and-so didn’t perform’.

“However, I think that’s the big change this year. Britain has figured out that’s the way to make us swim and perform – to get behind us.”