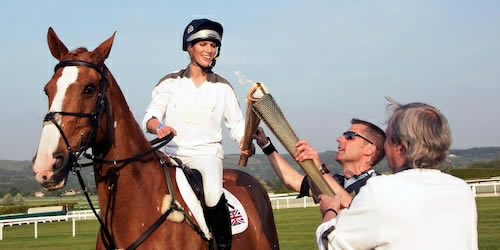 Zara Phillips gave a royal seal of approval to the Olympic torch relay as she carried the flame in her Cheltenham home town.

The Queen’s granddaughter was reunited with Toytown – the now retired horse she partnered to the world evening title in 2006.

And together they rode the entire length of the town’s racecourse’s famous finishing straight, before lighting a ceremonial cauldron at the conclusion of day five of the 70-day relay.

Once again huge crowds lined the route and more than 16,500 people, including her mother the Princess Royal, were at the racecourse to watch Phillips, who is still seeking to qualify for the British Olympic team, take her turn.

“It was unbelievable actually, I’m really shaking,” she admitted.

“It was an unbelievable experience and I am massively honoured for doing it.”

Phillips was not the only famous face among the 129 torchbearers as the flame travelled from Bristol to Cheltenham under brilliant blue skies.

Didier Drogba, who made the decisive contributions to Chelsea’s Champions League final victory on Saturday, carried the flame through Swindon while team-mate Josh McEachran ran through Calne.

David Hemery, 67, who broke a world record when he won gold in the 400 metre hurdles at the 1968 Mexico City Games, was cheered by enormous crowds in Royal Wootton Bassett.

Day six will take the torch from Gloucester to Worcester, where an evening celebration event will be held at the picturesque County Cricket Ground.

It will visit Gloucester Docks and Cathedral and the Severn Valley Railway and Sharron Davies, the Olympic silver medallist and BBC swimming commentator will be among the 119 torchbearers.

London 2012: ‘I used to worry Jessica Ennis was too selfish’