Roger Federer eases into the Madrid Open final with a 6-2 6-3 win over Janko Tipsarevic, setting up clash with Tomas Berdych 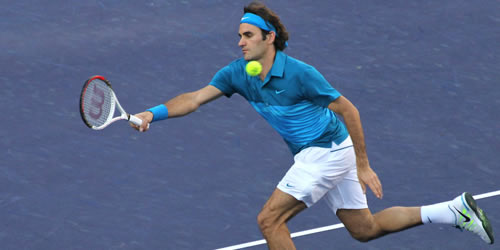 Roger Federer can reclaim the world No2 spot with victory on Sunday Photo: Marianne Bevis

Big men, big games, and big-time tennis: These were the qualities that brought No6 seed Tomas Berdych and No10 seed Juan Martin del Potro into a semi-final meeting in a Magic Box that shimmered in the Madrid heat.

Both had shown great form all week, with neither losing a set. Berdych, for his part, was serving especially well, unbroken in any of his 25 service games. But del Potro brought with him a perfect 10-0 record on clay this year—including the Estoril title last week—and he had beaten Berdych in their last three meetings without losing a set.

The towering duo were not perhaps top of the pile when it came to last-four predictions at the start of the week. This is clay, and there were more likely names than theirs to reach this stage—Rafael Nadal, Novak Djokovic and David Ferrer for a start.

But amid controversy about the new blue in Madrid—both fast and slippery—Berdych and del Potro found their feet better than most. Their size and their power, it seemed, gave them a little something extra: the weight to hit through the air of Madrid’s high plateau and stay grounded where others fell.

Del Potro took an early advantage, breaking Berdych for the first time in the tournament, but the Czech broke back at the last opportunity, 4-5 down, and it went to a tie-break.

Here, fortune favoured the man with the more aggression, the man to step into the net the more often, and that was Berdych, who went 5-1 up. But the more flexible game of the Argentine—a mix of flat power, some crafty all-court skills and a deceptively mobile defence, nipped back the gap to 5-5. Still Berdych persisted with his attack and stole the set with a sizzling cross-court forehand.

The Czech man looked full of confidence and energy despite furnace-like conditions that caused one unfortunate in the Manolo Santana metal cauldron to collapse. Berdych broke in the very first game of the second set and the Argentine then had to endure another long game to hold his next service game, too.

Having resisted the onslaught, Del Potro began to move his feet a little quicker and strike the ball with some extra vim, and he earned three break points in the sixth game. In a remarkable rally of attack and defence, with both men hurtling wide of the baseline, it was del Potro who came out on top to level at 3-3.

The Argentine started to motor through his own service games to lead 5-4 but he could not break through Berdych. He came close in the 11th, taking the Czech to deuce, but a huge backhand winner from Berdych denied del Potro and they headed into a second tie-break.

Again, Berdych had a real bounce in his step and was rock-solid on the clay: Indeed he showed remarkable balance on both wings, timing his strokes to perfection. He changed ends with a 4-2 advantage but, as before, del Potro closed the gap and they changed ends again at 6-6.

However, del Potro would not win another point, though he twice missed the line with near winners. Berdych finished as he had started, with bold, attacking tactics and the last of 12 net winners.

By the time the second semi-final took to court, the conditions were very different: The sun was gone and the wind was up. All the more reason, then, to keep rallies short and crisp, and with two of the better servers in the tournament facing one another, they had the ability to do just that.

Federer, however, was more adept at picking up his opponent’s first delivery than many others had been, limiting the Serb to his lowest number of aces—five—throughout the week. He pressured Tipsarevic in the fourth game, converted his second break point, and took a 4-1 lead.

The Serb responded with a love game of his own, but was trumped by another Federer love game of 1min 4 seconds. The Swiss finished the job with a second break, closing the set with two backhand winners down the line, 6-2. Serving had indeed been the key in defying the wind: Federer dropped just two points on serve, both on second deliveries.

At precisely the same point of the second set, Federer again worked two break points and a running forehand return of serve fired at a vicious angle—perhaps the shot of the match—converted the first.

Trailing 4-2, though, Tipsarevic dug deep to earn a first break point chance and he missed the backhand corner by a fraction. Again, serving for the set at 5-3, Federer did not have it all his own way. Tipsarevic ran him ragged to reach deuce, but that was his final hoorah.

Finishing with twice as many winners as errors, Federer held off an altogether different Serb from the one he might have expected to meet at the start of the week. The win took him to a 104th final, a 32nd Master final and a shot at his third Madrid title.

But titles are not the only thing now at stake. If Federer should beat Berdych, he will again draw level with Nadal’s record of 20 Masters titles. More significant still, he will overtake his long-term rival to regain the No2 ranking.

The task, though, is a formidable one. Berdych may have only beaten the Swiss four times in 14 meetings, but three of those were in their last five. And in the aggressive form Berdych has shown throughout this tournament, he could well thwart Federer at the last.