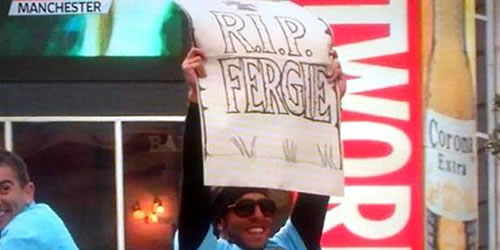 Manchester City have apologised for a “significant error of judgement” after Carlos Tevez was seen holding up a poster which read ‘RIP Fergie’ during the club’s Premier League victory parade on Monday.

The Argentine striker was handed the poster by a member of the the crowd during the celebrations and was pictured holding it above his head on Sky Sports News.

The sign could be a reference to Manchester United manager Sir Alex Ferguson’s claim that his side would never be underdogs to City. “Not in my lifetime,” said the Scot.

A City spokesperson said: “The creation of the tasteless material is in itself reprehensible. In accepting and brandishing it, Carlos has made a significant error of judgement.

“The club wishes to express its sincerest apologies to Sir Alex Ferguson and Manchester United for any offence or distress caused.”

Man City are worthy winners but talk of domination is premature